Print
By DJ Kenny B 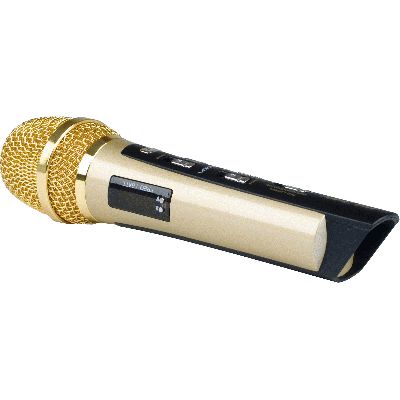 Something caught my eye while passing the Vocopro booth at NAMM 2016. It was    the All-U Karaoke mic and its counterpart, the All-U Karaoke FM mic.  The FM mic will allow you to broadcast to an empty fm channel on your  radio. I felt these had to be put to the test. On opening the package,  I noted that both microphones had a decent weight to them, the bodies  were cast metal and not plastic. The gold finish and silver slide  controls look sharp and I was very impressed with the craftsmanship and  quality of both of these microphones. It is suggested that before you use them the first time, you should charge them for 5 hours because of their internal batteries. When  fully charged, the All-U Karaoke mic’s red power light will turn off,  whereas on the FM model, it actually has a digital frequency/power  meter that tells you exactly how far it is charged. Included with the  microphones are cables for charging the mic, connecting to your devices  and a set of ear buds. The All-U Karaoke mic is a condenser mic and is  quite compact and will fit easily in a pocket or a purse for taking  your party on the road. The FM model is a dynamic mic and although  larger, it comes with a custom carrying case and easily travels.

For testing purposes we used an Android Samsung Note 4, an Apple iPad  Mini, and an ASUS ROG laptop. Our source for the media on both devices  were Karaoke apps available on the Apple’s App Store, Google’s Play  Store, and streaming Youtube videos.

The Test
In our first test, we plugged the All-U Karaoke mic into the sound  system in our lounge through the Asus Laptop mic input and were able  to run our Karaoke Hosting program and stream Youtube videos singing  along with the attached mic. There are 4 sliders on the standard model  and 5 on the FM model. They all move very smoothly and control the  bass, treble, echo and volume. The 5th slider on the FM model, when  plugged into an Android device, will control the volume of that Android  device separate from the microphone. Next, using the ipad mini and then  the Samsung Note 4,  we switched to the FM model. The setup was  fast and easy with the included directions and the sound was very full  and rich. On the bottom of each mic there are designated IOS and  Android connections. On all the tested devices, the sound was very crisp  and clear and the echo function adds the right amount of echo to your voice.

In testing the FM model, we were able to adjust the volume coming off of  the Note 4 separate from the volume on the mic with the additional slider   the FM model has. This feature allows for controlling the volume  on both devices from the mic.

Test 2
After running these tests in the lounge, our next test was hooking them  directly to a powered speaker using our own 1/8 stereo to 1/4 adapters.  For this test we used a JBL EON610. Both  microphones performed better with this setup. There was still plenty  of headroom left in the system to really crank the volume. Without using  a mixing board, the microphones sound exactly the way you would want them  to if you were performing at a karaoke show.

Test 3 Going Mobile
For this test we went on the road! For those of you that are totally into  Karaoke, this is for you (and me)! We plugged the All-U Karaoke mic into the car’s AUX port for a ride into the  city. Singing through the vehicles sound system sounded very clean without  any distortion. The FM model has a Digital Frequency/Power meter on it with  which we were able to adjust to connect to an empty fm station on our car  stereo. We were singing in no time! Between the effects available on the  mics and the cars stereo system, we had a Karaoke lounge on wheels.

Vocopro has a winner here with the All-U Karaoke and All-U FM Karaoke mics  for anyone who likes to Karaoke. From the novice just starting out to the  seasoned Karaoke pros, this is a great addition to your “gotta have” list. With  the apps available for Apple, Android, and the PC, you can access thousands of  karaoke tracks and videos online and record your performances to share with  family and friends. It is easy to setup and get started. You can take this  to your next party, road trip, or just stay at home and sing all night!