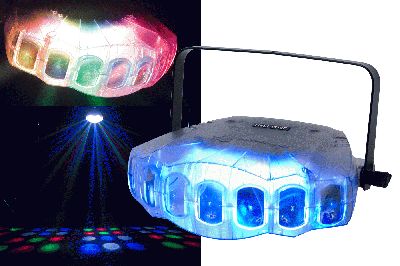 As a DJ that has been around the block a couple of times, I find it uniquely interesting how the designers at American DJ are taking a page from the old school lighting days. The Jellyfish is two lights in one, right out of the box. This new LED fixture has a translucent plastic body that glows as the light pulses to the music, much like the old color organ of yesteryear. Not to date myself, but it brought back memories of the colorful discolights that were the rage in the 70s. The second effect takes place when it’s seven lenses in front project beams of color onto the dance floor.

The color on this light is great from the dance floor. By producing dozens of patterns to the beat of the music it exudes a truly wild look. We only had one Jellyfish, but, we have seen them in showrooms set up as “schools” of four. I would highly suggest if you plan on purchasing the Jellyfish, you make sure it has some “friends”. The light incorporates a highly intuitive computer system that allows you to daisychain more Jellyfish onto it; with 4 or more, you will have a real nice effect that chases and changes covering a huge area of the dance floor. 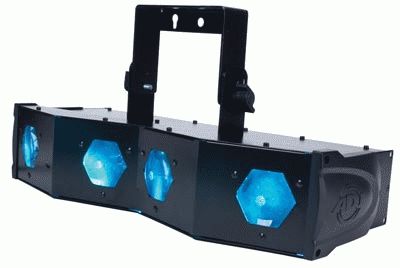 The Majestic LED is a new LED moonflower effect. It has a solid steel construction once again with no moving parts to worry about. Its’ four lenses produce four real nice beam effects that rival a 250watt moonflower, but by design, the focused LEDs are set in just the right patterns so the need for a spinning mirror like in the old moonflowers has been eliminated. The power drain of the 250 watt bulb is also gone. The Majestic only takes a mere 19watts. Even at that low current draw the 182 LEDs give you a stunning effect. In a gymnasium, we were able to cover an entire dance floor with colorful and vibrant beams of light.

Even though both the Jellyfish and the Majestic have DMX capabilities, their “stand alone” mode works out great for those that want it fast and simple.  If you are looking to move to an LED lightshow, take the plunge with a “school” (4) of Jellyfish and a Majestic. Together they will have your dance floor hopping with color and light.