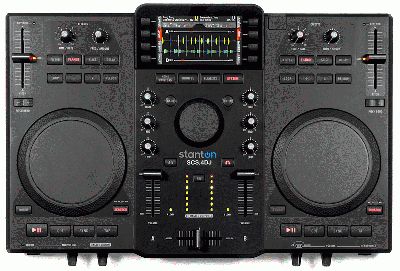 The Stanton SCS.4DJ takes digital DJing a step beyond the laptop. With the ability to play tracks directly from a hard drive, USB flash drive, or even your Android or iPhone, it removes the laptop completely from the picture. With its built in software, it performs all the same duties as a laptop but without the extra hardware. If you do feel you must have that laptop, the SCS.4DJ can act as a MIDI controller and be mapped to perform with Virtual DJ and other laptop based software.

The layout of the SCS.4DJ is much the same as most DJ controllers now days with a few small differences. In the center top section, it boasts a 4.3-inch high-resolution widescreen color LCD screen. The screen gives you a zoomable dual-frequency color waveform display and is also used for browsing music libraries and displaying track information. It will even show album cover art. The screen is flanked by four illuminated buttons that perform the tasks of home, waveform, browse, playlists and system.

A large central navigation wheel with back and enter buttons allows easy navigation of all screen-based activities. A USB keyboard can also be connected and used to search for music.

There are a couple of other buttons we need to point out. The record button allows you to record your mix “live” to an external storage device (the unit can record up to an hour internally if you forget your memory stick). The other button that piqued our interest was the Sync Engine. This button gives you quick and smooth beat matching of your tracks.

The mixer on the SCS.4DJ offers up a smooth 45mm crossfader that can be set to a respectable amount of fader curves. Each channel also features a 45mm slider. Tone adjustments can be made on each track via the 3-band EQ with complete kills and up to a +6 boost. Plus, there is an auto gain function that automatically adjusts the volume of each track to ensure continuity between tracks recorded at different volumes.

Track selection and browsing is via a large central navigation wheel with back and enter buttons for navigation of all screen-based activity. It is also possible to connect an external keyboard to use for track searches.

The 4.75” touch-sensitive jog wheels are very familiar and make it easy to scratch fast forward and rewind tracks. On the sides you find pitch controls that are lengthy 60 mm sliders with pitch bend and key lock functionality.

As for digital effects, the SCS.4DJ has four beat-synchronized effects per channel, filter, flange, slice and delay. Real-time control of the FX is performed through a knob on each deck. Just under the FX area on each deck, you see the auto-loop, loop length and reloop.

Play, pause and cue buttons, plus a manual TAP BPM button and a sync button sits just under the jog wheel.

As for the connectability of the SCS.4DJ, it has a full complement of USB (A) Inputs for connection of flash drives, external hard drives, iphones, androids and other smart phones or even an external USB keyboard (4 x USB A ports, 1 on top, 1 on rear, 2 more in a spacious drive compartment underneath).  Audio outputs are 1/4-inch TRS main outputs (+ 4 dB), 1/4 and 1/8-inch headphone outputs and the data out that is a USB (B) port for MIDI controller mode.

We ran the SCS.4DJ for about 3 months and found it to do some amazing things. The mixes were smooth and the built in sound card had no audible noise and appeared to resist RF interference that we have experienced in the past with controllers. Also we noticed zero crosstalk between channels in both the standalone mode and the midi mode.

The layout of the SCS.4DJ worked. We could easily navigate the system and really spin up some great mixes. We missed having a way to apply hot cues, but that was a minor inconvenience.

With the support of M3u playlists and the ability to import these playlists from a music library such as iTunes, it was easy to transition from a laptop to an all-in-one controller like the SCS.4DJ.  The “Auto-DJ” mode was extremely useful during cocktail hour where it would automatically mix the music in our dinner music playlist and later during our dance sets when we needed to make a pitstop to speak with the client or get a drink. Transitions were a lot smoother than with some laptop based software we have reviewed.

There was small little things we were going to touch upon but the operating system update released in November cured the few of the small annoyances in the original SCS.4DJ we were sent. This update sped up browsing and the window transitions along with improved backspins, audio inputs and outputs. Plus it gave the SCS.4DJ more Auto-DJ settings, an improved MIDI mode and overall functionality enhancements.

Included with that update was QuickGrid software that makes it possible for Mac and PC users to analyze tracks offline without the SCS.4DJ involved.

Stanton also supplied us with an extra heavy duty gig bag for our unit that protected it and kept it clean during travel. It makes the SCS.4DJ even more portable without having to worry about dust and damage. Well designed with a headphone compartment, places for cables and other items such as drives, this bag is a must have accessory.

The Stanton SCS.4DJ will work well for the mobile DJs out there no doubt. It’s very portable and rich with features a mobile DJ can use. It was a pleasure to use for the past few months. The only ding in the SCS.4DJ armor appears to be the hot cue feature which makes it a hard sell for some dedicated digital club jocks and music artists.