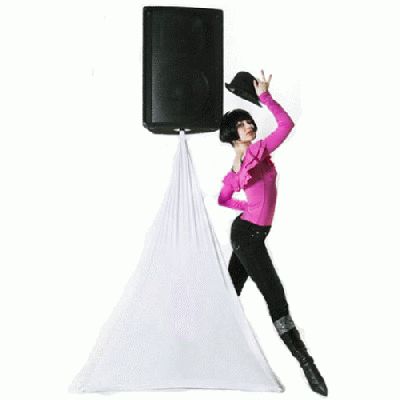 Back in the day, there was a DJ group called MEGA or Mobile Entertainers Guild of America. It was the original "Think Tank" that so many have copied over the years. To make a long story short, during one of the yearly meetings our "gear guru" Fritz Guth, brought in a new idea he came up with. It was a simple cover that hung over a speaker on a tri-pod and he placed a plant on top as decoration. My point is simply that DJs have been trying to hide the "mechanicals" and industrial look of their gear for a very long time. Needless to say, Fritz' baggy cover never quite made it mainstream and neither did the planter.

Here we are some 15 years later and DJs are even more conscious of how their gear looks. Scrim King just might have the answer to part of the problem. We were recently sent a pair of white (they also come in black) Skrim King speaker stand covers.

You know it's going to happen. Some child at a wedding is going to spill some soda or punch on your nice white covers. We could not resist. We took red punch, Gatoraid, coffee and soda and had an "accident". With a little prewash and one washing, they came out like new. Made of a heavyweight spandex material with reinforced stitching, the covers are made to last.

The white looks great but if you want to get a little creative, you can throw an LED par can behind them and the white can become any color you want. Also if you have a backlit frontboard these are a perfect match to complete that "look" you have been striving for.