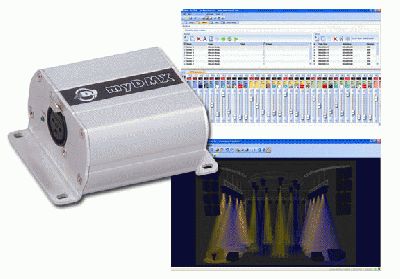 I can’t tell you that I am an expert at DMX, because I am not. I am the average mobile DJ like most of you and for the last 20 years I’ve used the traditional plug and play lighting that was quick and easy to setup. Using a switch box I would “set the scene” for each song I played and fell into the same routine. These past few years, boredom over took me and I wanted more. I wanted a way to take control of my lights and have them do something other than be turned on to run the same set program or be turned off. Enter DMX.

Now when you say DMX to most DJs like me they respond with, “Eek!” and run the other way because of the work involved in setting up controllers, scenes, addresses, numbers, programs, blackouts, and other lighting terms that we find scary.

I had purchased a DMX controller board years ago and used it as a dimmer for the lights at our fashion shows. That was easy, plug them in and move the sliders, just like on my mixer. Controlling other lights, moving heads, gobos and XY axis was completely strange to me. But how hard could it be? After about a day of playing with my controller board, I gave up. It was just too much to keep track of. I was lost in another world.

Back in the 70s, I ran a lightshow with a Radio Shack Color computer and a card I designed  with some triacs (electronic switches) and a little bit of basic programming. It may have taken 30 minutes to load the program from a tape player, but it was very hi-tech back then. Moving forward to now, I set out on an online quest to find a system to run my lights from a computer.

My search revealed numerous programs and boxes that attach to a computer. Prices were all over the board. Since I had years of luck with my American DJ lights, I decided that I would contact them to see if they had a solution.

The My DMX or the “box of tricks” as I like to call it, arrived and upon unpacking it, I found a smallish silver box not much larger than a couple of packs of cards, a USB cable, a CDrom and a manual. “This is their solution?” It looked almost like the small box I put together for my color computer years ago, but this turned out to be a little more sophisticated. Being a geek at heart, I grabbed my nearest laptop, which was on the coffee table, and an American DJ X-move light from the kitchen (I have the best wife) and dove in.

I won’t bore you with the installation details, but I will say install the program first, plug in the “box of tricks” next, and then start the program. The program will then recognize it and all will be good. Program installed, check. Box recognized, check, light plugged in, check, light turned on, and check. Now what about controlling it?

Once the My DMX program was loaded, I was greeted with a list of lighting manufacturers on one side and a grid layout on the other and some sliders down below. Not being one to read instructions, I wanted to see exactly how hard it was to figure out. I found American DJ in the list and expanded it by pressing the plus sign, scrolled down and found X-move.

From doing a little prior reading, I knew that when running DMX you had to have each light on its own separate address. That was what the grid was for. I discovered I could drag the light from the dropdown to the grid and place it on any address I wanted… cool!

Out of the box, the X-move was set to address 1 (I cheated and read the LED on the front of the light) so I dragged the X-move name to the 1 position on the grid. With that done the first 8 sliders changed into the controls for all the features of the X-move, double cool! By just moving each slider, I was able to make the X-move do anything I wanted. For the first time I felt the power of DMX within my reach!

Less than 10 minutes later, I was chasing the cat around the room with colorful gobos and strobing lights. “That was easy”, I thought, but what about more than one light? So I brought in my X-scan from the den and daisy chained it to the X-move, dragged X-scan from the list and dropped it on the next free section of the grid, pushed menu until I saw “adds” on the X-scan, changed the address to 9 and now had control of two lights. The Lords of Robotic Lighting where shining on me now. The cat dove for cover under the couch.

Once again, within 10 minutes I had my lights programmed! It was a simple program, but they moved around the room, gobos changed, colors changed and I made it do it, wow. Then I discovered the wizard. This little feature or “trick” allowed me to setup a complete light show in a matter of minutes.

As the lights bounced around the room they dropped down on an old dusty box over in the corner. In this box was the bane of my lighting existence, an old Martin Image Scan. You see, this is the light that no matter what I tried, I could not get to ever do anything. I wonder…

Pulling the light over was like pulling a Volkswagon out of a ditch, it was a heavy sucker! Grabbing what the seller called the special cable, I plugged it into the X-scan and fired it up. Out of the drop-down I found Image Scan under the Martin list and dragged it over to sit just past the X-scan. Now to set the address. This thing had dipswitches. You know those little bitty switches that you never can tell if ON is up or down? How the heck? Then I remembered a small window in the My DMX program that popped up when I moved the Image Scan over it had a picture that looked a lot like dipswitches. Turns out is was. Looking at the image, I quickly set up the dipswitches to the correct address.

The moment of truth was upon us. Then it happened– this behemoth of a light came to life as I moved the sliders on the screen. The words, “Buy Now” leapt to the wall and started spinning. Amazing Goliath lives! Controlling the Image Scan was now within my grasp. It was as easy as the other two lights, but much more gratifying since it had gathered dust for over two months and worked well as a doorstop. I was now in control of it and the $500 ebay purchase my wife scolded me over because it did not work, was now my minion. It moved and swayed to my commands. Thanks to this little “box of tricks,” I was the DMX master of my lighting, the My DMX from American DJ my savior.

Why do I call the My DMX my “box of tricks”? Well this small box magically changed the way I think about lighting. Like my music, I can now program my lights to match the mood, venue, theme and the music of any event, quickly and painlessly. You will find it has many features or “tricks” that I have not even touched upon.

All in all, if you are looking to make the leap to DMX, this is the way to go. The My DMX software takes up very little processing power and RAM, so dust off that old laptop on the top shelf of your closet, you know the one next to the original stuffed California Raisin doll. Give it a try. The price is right, and if I can get it to work without reading the instructions, anyone should be able to. It really was that easy.