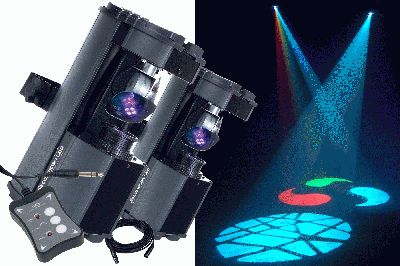 Add some "pop" to your show

Having run a set of Comscan LED units for the last couple of months, I can safely say they add quite the “pop” to our lightshow. This was my first real experience with a mirror type scanner from American DJ. DMX, bright, clean, clear and low power consumption where the traits I was looking for in a new scanner light to add to my collection and I found it in the Comscan LEDs. With 10 watt LEDs, 8 gobos/colors and a long list of goodies it matched my want list 100%.

You are given three different ways to run these lights. Show mode is the no-brainer plug it in and let it go through it’s built in programs. Sound Active mode is almost the same as the Show mode but allows them to interpret the music you are playing and control the color, pan, tilt and 8 gobos accordingly. With the 5 channel DMX mode, I was able to set up my own programs that included dimming from 0-100, shake effect, strobe effect, X/Y tilt and pan. I did miss the option of a DMX controlled focus, but found once it was set for the room, I was fine.
Out of the box, the Comscan LEDs are everything you need to add a scanning light system to your show. Packaged two in a box with all the cords, ADJ even remembered to throw in the UC3 controller to make it the complete package.

At first glance they appeared to be built like most any other DJ or club light until I picked one up. Even though they kept the weight manageable, ADJ did not cut corners on the build for this light. The enclosure is made of a heavy grade steel and then texture coated in the classic black and capped off with some industrial plastic or nylon end caps. They also thought ahead and included a steel protector plate that you can remove for the show and replace for transport, thus eliminating 7 years bad luck when you drop the unit or load something on top of it crushing the mirror.

Prepping the Comscan LEDs for your performance is as simple as punching a few buttons on the end and making sure you have the correct setting via the LED readout, mounting the units, plugging in the cables and removing the protective plates.

Sometimes I am not the most careful person with my lights and for you guys, this is a good thing. Four times I had my units roll off the top of my roadcases raw, without case or padding from a height of about 5 feet. Every time it was an accident and other than a few scuff marks and a small rattle in one of them, they function flawlessly. I think the mirror protector plate saved me almost every time. This is an extreme case scenario and I don’t suggest anyone purposely damage their gear because it could void the 3 year limited warranty.