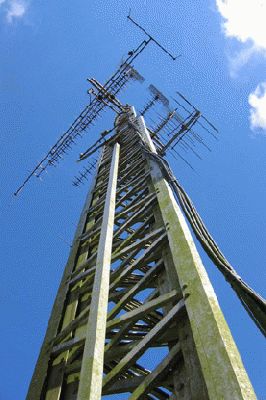 Even in the rural areas the demise of 90% of the wireless microphones could be on the horizon thanks to Verizon Wireless.

“The licenses we bought in the 700MHz auction cover the whole US,” says Tony Melone, a Verizon Wireless V.P., in an interview with CNET at this week’s CTIA mobile trade show. “And we plan to roll out LTE [high-speed mobile service] throughout the entire country, including places where we don’t offer our [current] cell phone service today.”

If these plans succeed, Verizon will criss-cross rual America with a network of towers broadcasting high power 700MHz signals for both cellular phone and data services. Verizon intends to start introducing this new network in 2010.

Because the [700 MHz] spectrum is in a lower frequency, it can transmit signals over longer distances and penetrate through obstacles. And because the signals travel longer distances, Verizon can deploy fewer cell towers than if it used spectrum from a higher frequency band, which means it can provide coverage at a lower cost.

“I can’t pre-announce any products or services,” Melone said. “But I can envision offering devices that are geared toward putting wireless broadband in the home. And then people could use Wi-Fi to share the connection with multiple devices like they do today with router connected to their DSL or cable modem service.”

What this means for DJs is that the concept of waiting to be caught and warned by the FCC before upgrading their wireless microphones will no longer be an option. The network Verizon plans will broadcast a signal so strong it will overwhelm most all pre-2009 700MHz microphone receivers, making them next to useless. If you are running a wireless microphone system that was purchased before February 2009 or any wireless microphone system that you are not sure of, now would be a good time to check what frequency it operates on. If it is in the 700MHz spectrum now would be a good time to upgrade to an FCC compliant system.

Sid Vanderpool is the 2006 inductee into the DJ Hall of Fame and 2000 Technical DJ of the Year Award and CEO of DJzone, the largest online network of DJ websites most popular DJ networking website on the planet.