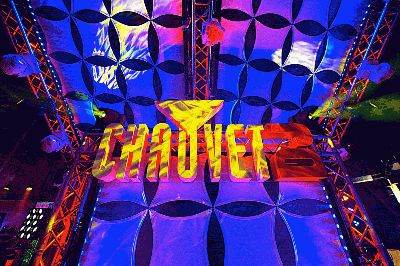 CHAUVET®  DJ won the Best Small Booth Design Award at this year’s LDI Show, reflecting  not only the booth’s stunning appearance, but the fact that it effectively showcased more than 85 lighting fixtures, representing an explosion of new technologies, in a space totaling only 400 square feet.  While much attention was paid to its creative design and spectacular light show, the award-winning booth also owes its LDI accolade to an “underlying hero” – a sturdy and ingenious trussing system designed by CHAUVET DJ Senior Product Manager Allan Reiss, built with products from TRUSST, a sub-brand of Chauvet.

According to Reiss, the TRUSST products’ light weight, flexibility and quick assembly made it easy to erect a truss structure that fulfilled his design vision, while also being able to work in the allotted 20-foot by 20-foot space.  In constructing the CHAUVET DJ booth, Reiss used a total of 60 pieces of truss, consisting of straight pieces at various lengths, corner blocks, hinges, base plates, and 2-way and 3-way corners.

The basic booth configuration was a small truss ground structure with four legs, which was distinguished by a grand, commanding angled roof that swept outward and upward from the rear.  The roof was connected to the ground structure in the back 8 feet off the ground, and tilted at a 45° angle so that it formed a ceiling, which ascended to 20 feet in front. Soaring above the show floor, the slanted roof was visible from the main entrance to the exhibit hall, appearing as a color-changing beacon to draw LDI attendees to the CHAUVET DJ booth.

“The most difficult challenge for us was rigging the ceiling at the angle we wanted,” said Reiss.  “Due to the desired angle, the physical length of truss was longer than the allotted booth space when the truss was lying on the ground.  However, once the rig was angled and in the air, the truss fit within our 20-foot space, thanks to basic geometry and proper planning.”

Working with TRUSST products made the job go smoother and faster, Reiss said.  The TRUSST brand features rugged but lightweight modular components that can be combined in virtually any configuration to meet all types of rigging needs. The truss pieces utilize a conical connector system, which allows for greater security at stress points, quick assembly and more versatile rigging options.

“The best part of using TRUSST for this build was the ease of assembly,” said Reiss.  “This is due to the conical system, as well as the fact that the different truss pieces can be assembled in any orientation because they have ‘webbing’ or cross braces on all four sides.  This made the booth assembly go up very quickly, which saved us time and, thus, money.”