PVDJ, a division of Peavey Electronics Corporation proudly introduces the new Digital Audio Interface (DAI), the first hardware and software package to allow DJs to remix in real time? This exclusive, far advanced technology is also truly stable and has to be seen to be believed.

The DAI controller works in tandem with its companion PVDJ software package, that is built around a 56?bit audio engine. The software requires no additional drivers ?it runs using existing Windows or Mac OSX drivers. The DAI is also a true “plug & play” interface; if either the USB or power cord is unplugged, the DAI will pick up exactly where it left off once the cord is replaced, without rebooting. 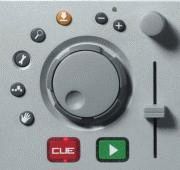 The user friendly, intuitive DAI controller is separated into two players, with a touchsensitive screen between them that shows the current track play list with track progress bar and BPM counter. An on screen keyboard allows quick song retrieval by automatically narrowing the search field as you type.
The DAI will play and mix.MP3, .WAV and .CDA audio files, with all the controls needed for real time remixing. The jog wheels on either side of the controller can be used to create “scratching” effects .

The DAI automatically finds the nearest beat when setting a cue point, and loops can be created on the fly using the Grabbing feature that allows one button push looping. Once a loop has been Grabbed and can be both moved backwards and forwards one beat at a time and lengthened or shortened on the fly. Allowing for true real time remixing. This “grabbing” function also always exits the loop at the end of the measure (unless the user tells it otherwise).

The user can also create phasing effects with the fine tuning adjust.
The DAI also includes an Auto Pilot feature with fully automated mixing and tempo matching, This acts as a helping feature and eliminates “dead air”. Auto Pilot only kicks in during the last 15 seconds of a track, so it can be left on as a safeguard without interfering with the unit’s other controls. Auto Pilot detects the end of the currently playing track and mixes in the next song automatically aligning the beat and matching
the tempo.