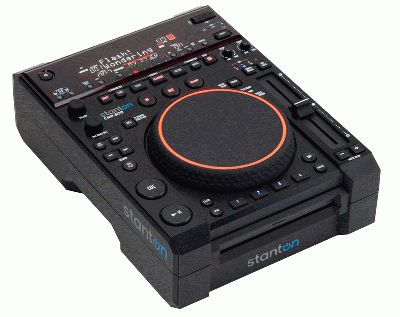 Stanton® Magnetics, a member of the Stanton Group of companies and an industry leader in the design and manufacture of professional audio products for DJs, will be previewing the CMP.800 Multi-Format Player with MIDI Controller at Musikmesse 2011 (Hall 5.1, Stand D98). Building upon Stanton’s existing CD and CD-MP3 playback functionality, the CMP.800 now also offers the additional option to access and play songs from external thumb and hard drives with loaded MP3 and WAV files.

“With the CMP.800, users now have access to their entire music library, regardless of format,” says Timothy Dorwart, CEO of the Stanton Group.  “In addition, the CMP.800 provides all the features and options required by today’s technology-minded DJ, making it a true performance cross-media player for DJ’s at an attractive price.”

Users can control multiple functions including pitch bend, looping and FX via the CMP.800’s rich feature set. Its user-selectable beat sync engine allows users to easily manipulate on-board effects and looping.  The CMP.800 offers MIDI control of applications (such as Native Instrument’s Traktor and Mixvibes Cross) with full assignment of virtually every button and knob on the top panel as well as Deck A/B assignment. For easy viewing of cue points and speed, as well as pitch/volume control for sampling, the CMP.800 comes fully-equipped with an illuminated platter wheel, with nine different LED modes. For even more creative remix possibilities, the CMP.800 lets DJs store four five-second samples on the unit that can be played simultaneously with their currently playing track (CD or MP3). Sample playback is controlled from the four rugged rubber trigger pads on the front of the unit, and offers available pitch and volume control for mixing the samples with currently playing material.

The CMP.800’s unique “ChainLink” feature allows users to connect two CMP.800’s via a single USB cable for sharing a single external USB mass storage device between the two players, eliminating the need for DJs to manage multiple storage devices—sometimes with the identical content. Also included is the “Media Wallet” software, which allows DJs to sort and prepare media for playback, creating playlists and organizing their songs on their computer before a gig. Beat-Syncable DSP effects provided by the CMP.800 include Echo, Flanger and Filter. Its four-bank sampler is controlled via rugged trigger pads for mixing samples in with the material being played.  It outputs to digital S/PDIF, headphone output with volume control and analog RCA.