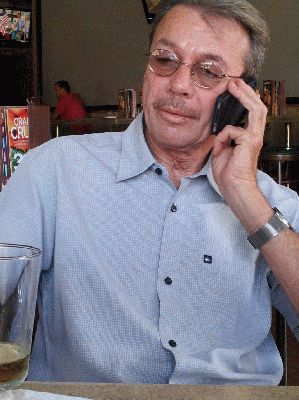 DJzone Crystal Disc Awards is pleased to announce the recipient of the 2011 Crystal Disc Lifetime Achievement Award, Scott Davies CEO of American DJ. The award presentation will take place on the opening day of the 2011 LDI Conference on Friday, October 18, 2011 in Orlando, Florida.

New this year, this award signifies both achievement and contributions to the DJ and entertainment industry.

Scott Davies
After completing his service in the Navy in the 1970s, Scott Davies arrived in Los Angeles not sure about his career plans other than knowing he wanted to do something that would allow him to express his creativity and make a difference in the lives of others. He certainly succeeded in doing just that by working with his brother Chuck to launch American DJ, one of the most iconic names in the world of mobile entertainment.

The American DJ lighting products and later American Audio gear sold by the company the Davies brothers started in 1985 has energized the performances of DJs on every continent, except Antarctica. Many superstar entertainers, (both DJs and musicians), have used American DJ products over the years, but Scott is especially proud of the impact his lighting and audio gear has had on everyday working DJs, because he was once one himself.

Scott spent much of his time in the 1970s and 80s working as a DJ in and around LA. He remembers what it was like DJing at a time when there really wasn’t any commercial gear on the market for mobile entertainers. Back then DJs often found themselves having to improvise -- like the time Scott had to use a couple of turntables and other gear picked up at a local Radio Shack to create a “mixer” for a roller rink.

The improvising skills Scott sharpened during his time as an early DJ came in handy later when he developed products for American DJ. Along the way he hired other DJs to work for his company, and they contributed their own innovative product ideas learned from real-world experience. This has given American DJ a ground-up approach to product development – and DJs the world over are better off as a result.