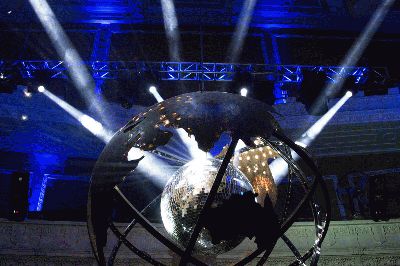 You don’t get any more steeped in Broadway tradition than the Liberty Theater at the heart of Times Square. After all, it was here that George M Cohan’s iconic “Give My Regards To Broadway” was first performed on a New York stage.  That was a long time ago – November 7, 1904 to be exact – today the venerable building has taken on new life as one of the Big Apple’s hottest nightspots and scene of A-list parties, including (no surprise) an almost impossible to squeeze into New Year’s Eve bash.

Emblematic of the Liberty’s metamorphosis is its sizzling color-intense lighting design. Created by LD Dougie Lazer of DNA Lighting, (New York), the multi-faceted lighting rig brings out the beauty of the historic theater-turned-nightclub in all its Beaux Arts glory.  At the center of it all is a spacious dancefloor energized by the razor sharp beams and rich intense colors provided by eight Rogue R1 Beam moving fixtures from CHAUVET Professional.

“I was thinking of going with another big name moving beam that’s been used on tours, but Frank Danko (BMG Hudson) suggested that I take a look at these new Rogue fixtures,” said Lazer. “The Rogue R1 Beam cost considerably less than the other fixture, and it gives me all the brightness I need. As a matter of fact, its output is so good; its light actually glitters on the dancefloor. But what really turned me on was that it had so many cool performance features. Without question, it is way more feature-rich than the bigger, more costly unit.”

Lazer detailed how the Rogue R1 Beam’s features have come into play at the Liberty Theater.  “The color wheel gives us a lot of options (14 slots plus white), and there are two sets of prisms (5-facet and 8-facet) that we use for layering, plus we do a lot with the gobo functions on the dancefloor and walls. Another very nice thing is the way the Rogue produces an extremely tight beam. The club has already hosted some high-profile events for companies like Time Warner; we’ve actually used the beams from the Rogues to pinspot tables.”

The eight Rogue R1 Beams are positioned four each on two 30-foot long sections of movable truss.  The truss is raised 60 feet over the dancefloor at night to create impressive aerial effects in the three-tiered club interior.  Earlier in the day when the club becomes a restaurant and during events, the truss is lowered to varying heights. “We arrange the truss in different ways to create some very captivating geometric patterns with the lights,” said Lazer. “The Rogue is very flexible in terms of varying beam angles, scrolling speeds and splitting colors. Plus it has the output to punch through smoke and fog so it offers a lot of nice creative possibilities.”

Lazer controls the Rogue R1 Beam units wirelessly as he does most of the fixtures in his rig. He points out that this was essential working in a 110-year-old building that’s been designated as a historic landmark. “It’s a whole different ballgame when you design for a building like this,” he said. “You can’t go around drilling holes, so running wire is an issue. You have to be able to control things wirelessly. Compact, low power drawing LED fixtures like the Rogue are essential in this environment.”

Like everyone associated with the Liberty Theater restoration project, Lazer appreciates the historic status of the building. Prior to becoming a hot Manhattan nightspot shortly before New Year’s Eve 2013, the Liberty Theater had fallen on hard times. After losing its luster as a live theatre venue to newer locations in the 1930s, the building served as a movie theater for a half century, before closing its doors and later being reopened as part of a successful Times Square renovation project.  Now, thanks to new technology in products like the Rogue R1 Beam, this proud old building has been given a new and very chic lease on life.