The term Pioneer in the DJ industry has just been redefined.

For years, mixing and scratching DJs could only express their artistry, create a unique sound and excite and energize the crowd through the use of vinyl turntables.. Then came the CD turntable in the form of Pioneer’s breakthrough CDJ-1000. Suddenly DJs could do everything with a CD that they previously only could do on a vinyl turntable. Also with the CDJ-1000, DJs had easy access live in the club to dozens of other loops, effects and enhancements to produce musical elements usually only found in a production studio.

As the popularity of this new CD turntable grew, MTV was ushering in a new era in entertainment with music videos which gave a new dimension to the artists’ performances. Videos quickly became a part of dance floor entertainment, even with the limitations of the now-primitive format of videotape. But even after videos on DVD became commonplace, the available playback hardware still didn’t allow the mixing flexibility of either vinyl of CD.

Jump to today and Pioneer’s DVJ-1000. Although DJs could now emulate all the mixing and scratching effects they enjoyed with vinyl or the legacy CDJ-1000, but lacked a comparable mixer to utilize it to its fullest extent.

And that’s why I’m in New York City tonight.

Just minutes away from the glitter of Broadway sits the Pacha Club. A trendy mega club and a behemoth in New York’s nightlife scene, this was to be the place where a new defining moment in DJ history would be set in motion.

Some could have mistaken the stars of this show to be Tommy Lee & DJ Aero, electronic virtuoso BT; SV2, trance diva Sandra Collins and her VJ partner Vello Virkhaus, or even Roonie G. But the real star tonight was Pioneer’s new SVM-1000, the world's first 4-channel reference audio and video combination mixer designed for elite DJs, VJs and club venues, and a new moniker that would be coined this night, AVDJ.

Members of the worldwide DJ press were first to experience the SVM-1000. The looks are just as advanced as its technology. Take the Pioneer DJM-800 and split it down the middle. Then insert an 11” area with two distinct touch screens. The larger upper touch screen allows you to interact with the video and audio effects. The lower smaller touch screen includes a monitor for each of the 4 channels to preview video and a touch screen crossfader that can be synced with the physical crossfader located just under it. 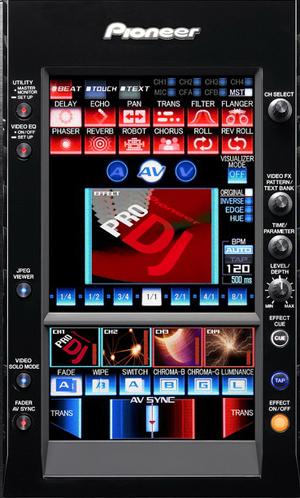 On each side of the touch screen crossfader is a hot key where at a touch of the screen, you can switch between channels of video and audio. Trim knobs are added on each channel that control video intensity etc. and the audio EQ is hard wired into the video. Upon adjusting the EQ, the video changes accordingly. While mixing audio and video is not new to the industry – what is unique to the SVM-1000 is the ability to layer up to 4 channels of video and audio simultaneously – “world’s first” - and all of this is being done in the hardware domain.

An integrated USB port and SD card slot are used to add static images into the mix. Another built-in feature is the character generator which allows you to throw text over the top of your video. Any of the upper screen effect can also be assigned to static images, text and video inputs giving every type of image unlimited flexibility.

Imagine taking digital snaps of club patrons or party guests which the AVDJ can drop into his mix giving it a personal touch. The wedding jock could also use this at a reception to create an on-the-fly montage of images from the ceremony directly off the photographer’s memory card. Wouldn't that just send the bride and groom’s first dance over the top?

On the back you will see each channel has a composite and s-video input along with traditional audio inputs including digital and a BNC input called “sync” which are used with DVJ players to minimize video latency and provide an accurate mix. The audio outputs include balanced XLRs, master RCAs, booth 1/4" and digital. On the video out section, things appear to be a little different. The master bus has component BNCs, a composite BNC, and the traditional composite RCA and S-video out. On the monitor bus there is the S-video and RCA. One output that was not gone over at the press conference is the midi output. All they need to do is need to confirm total midi protocol support and this could possibly be used to control lighting and effects.

But this stellar night at New York’s famed Pacha was just beginning. A stunning set by the world famous Roonie not only entertained and kept everyone moving, his set actually told a story. Roonie finally had the technical instrument to make his creativity truly come alive with the SVM-1000 and work it he did. Utilizing every feature and facet, dozens of video and audio clips - including some that were filmed less than an hour prior to his show - Roonie took everyone on a wild ride.

The VIP crowd was treated to a late night Q&A with all the headliners; of which the consensus was the SVM-1000 was a leap in the DJ evolution. It takes DJing to a point it has never been before, and according to Tommy Lee, makes “watching a guy on a turntable look boring.” BT remarked comparing it to all the DJ milestones he’d witnessed over the years - including direct drive turntables ¬ Pioneer’s SVM-1000 is “massive”. 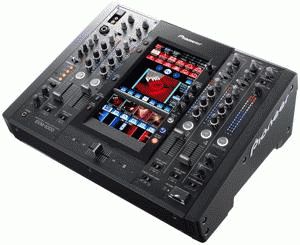 The overall feel of this unit was solid. You could "feel" that much thought went into the planning and design of this mixer and that it was built rugged and ready for any abuse a jock might throw at it. It took me a few minutes to learn some of the functions, but within a half hour, found it to be as addicting as a PS3 in the electronics department at Target. I was really mixing videos and adding in effects. Moving my finger over the output image displayed in the upper screen, I made the effects move to the beat of the music. I even figured out how to throw some text over the video. Move over Roonie.

I left the party blown away by this marriage of audio and video mixing effects. The features of the SVM-1000 complemented by the DVJ-1000 decks allows any DJ to be a director, producer, and storyteller live on stage. Finally an audience can no longer merely hear what the DJ hears, but can literally “see” the mix.