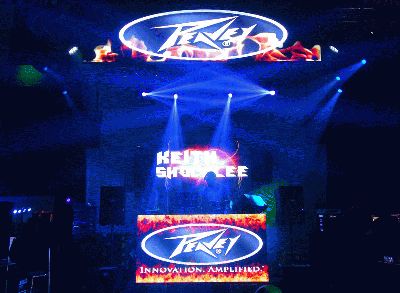 The name Peavey has been synonymous with legendary rock bands; so much so that the artists who have used the company’s amps, speakers and other gear can form a virtual rock hall of fame. Now Peavey Electronics is also making its presence felt in the DJ market. Just one look at the company’s awe-inspiring booth at DJ Expo in Atlantic City made this abundantly clear.

Hosted by Canal Sound and Light, the booth featured an all-star lineup of DJ performers and an eye-tingling lightshow created with a plethora of fixtures from CHAUVET Professional.  The lighting highlighted a selection of acclaimed pro audio products from Peavey, including the company’s benchmark line array system, the Versarray™, along with the Peavey IPR™ Series and Crest Audio Pro-LITE™ Series of power amplifiers. Areas of the booth were also outfitted with Peavey’s compact and portable PVX™ series of active and passive loudspeakers, plus Peavey microphones and stage accessories.

“Peavey Electronics and Canal Sound and Light told us they wanted to make a statement at this show,” said LD Jason Ayala of Jason Blends (New York), who designed the booth. “They wanted something that went beyond the standard trade show booth look and entered the realm of a production with an EDM festival feel. At the same time there wasn’t a gigantic budget to spend, so the fixtures we chose had to give us a lot of impact for our investment.”

“With the combination of Chauvet lighting and Peavey sound equipment, we were able to create a true audio and visual experience,” added Peavey’s Chris Wooten, Trade Show and Event Manager. “The atmosphere was electric, and I think we made quite an impact on DJ Expo attendees.”

The lighting design created by Ayala used the Rogue R2 Spots to highlight the DJs on the booth stage, a stellar collection of performers that included DJ Leverage, DJ Cutlass, DJ Jay Ski and DJ Keith Shocklee, an original member of the groundbreaking hip-hop group Public Enemy. The New York-based LD used the Rogue R2 Beams and Strikes to create eye candy for the large crowd that gathered to watch the iconic DJs perform.

“The linear prism feature in the Rogue fixtures was something that really impressed me,” said Ayala. “It allows you to create a variety of different focal points with your prism. I am sure I’ll be taking advantage of this feature long into the future.”

Ayala arrange the PVP panels in three levels.  The top panel measured 40” by 160”, and the  bottom  two were 40” by 80”. The larger top panel was devoted to Peavey branding. “We put the Peavey name on top, and of course it made a powerful branding statement since the panel’s images were so sharp and clear,” he said. “”There’s no way you can compare this to a standard vinyl panel.”

The middle panel featured the performer’s name and branding images, while the bottom panel was turned over to pixel images that matched the music. All three panels were often coordinated in terms of color and background design to make a powerful visual impression.

“It was very easy to install the panels and program content,” said Ayala.  “They really helped us create the look of a DJ booth right in the middle of the Peavey booth.  Overall, they were instrumental in helping us engage DJs at this show.”