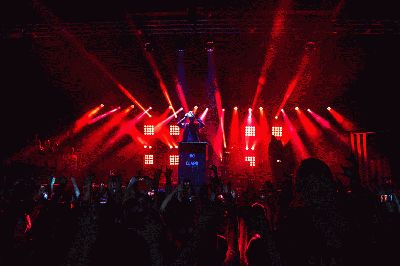 Red-hot rapper Machine Gun Kelly lives up to his name with a rapid fire delivery and crackling stage presence that, in the words of one of his trademark songs, get crowds to “lace up,” for a spiky, hard-edged experience.  Any lightshow at a concert by “MGK,” as the lanky rapper is affectionately known to his legion of fans, better be able to blow past conventional expectations with brain searing intensity, which is precisely what lighting designer Alex Kay delivered for the rapper’s recent “No Class Tour,” a 40 city escapade done with iconic metal band Limp Bizkit.

Kay, who’s been working with Kelly since the 24-year-old rapper was doing local shows in his hometown of Cleveland, used a power blasting collection of fixtures provided by 4Wall Entertainment Lighting’s Los Angeles office that utilized aerial beams, strobes, colorized foggers and a collection of super intense Nexus 4 x 4 panels from CHAUVET Professional.

The Nexus panels were used to anchor “towers of power” on the No Class Tour.  Kay’s design had a total of four 10-foot and two 5-foot truss towers positioned upstage to focus attention on MGK and his band. A pair of Nexus panels was arranged on each tall tower, sandwiching a high-output strobe and below an aerial moving beam.  The smaller truss towers had moving LED beams positioned on them. According to Kay, the intense output of the Nexus panels “had no trouble keeping up” with the brightness of their beam and strobe neighbors.

“Nexus is amazingly powerful,” said Kay. “The panels worked beautifully with the other fixtures on the truss. There was a ton of interaction between the artist and audience throughout the MGK tour, so being able to appropriately light the crowd is important.  The Chauvet Nexus 4x4 panels do a great job of that.”

Kay praised his collaborative partners in bringing the standout design together. “There was a lot of collaboration between our TM and FOH guy and me about this interactive design,” said the LD. “Having independent truss uprights and being able to vary their height was critical to our planning, because we had to fit the rig to different size venues from a place that held 800 to a place that held ten times that number.”

Although the flexibility of the design was important given the varied size of the tour’s venues, more essential to Kay and his client was the powerful impact of the lighting rig. Kay knew his rig had to project and reflect the raw emotional power that characterizes MGK’s recordings and performances. The intense output of the Nexus panels helped him deliver this impact.

“We typically ran the Nexus panels at 10% and color matched them with each look using just about every color you can think of in the process,” said Kay. “The panels also worked great as a blinder at different points in the concert. When I used them as blinders, I had the RGB intensities all the way up along with the master intensity at 100%. It was a power statement.”

Kay also used the Nexus panels as backlighting.  “MGK stands at 6’4” and creates a pretty powerful silhouette when he’s backlit,” said the LD. “Keeping the stage black except for the Nexus panels outlining MGK is part of several looks we created throughout the show, all of which were crowd favorites.”

Another crowd favorite were the streams of colored fog that enveloped the stage at critical points in the concert.  The fog was produced by the CHAUVET DJ Geyser RGB fogger, which shoots beams of RGB light through thick clouds of water-based fog to create a stunning visual impression.

“The Geysers were a fantastic alternative to a CO₂ jet fogger,” said Kay. “Last December we toured Canada for a month and I knew that arranging for CO₂ in every city and crossing the border with it would have been such a hassle I looked for alternatives. The Geysers were the perfect solution; I liked them so much I brought 6 of them with me on the No Class Tour. Imagine a totally black stage, single spotlight on the artist, and 6 – 25’ tall bright red towers of smoke surrounding him – it looked pretty sick!”

The Nexus 4x4 panels and other fixtures in Kay’s rig had the power and brightness to cut through the thick fog of the Geyser RGB. “Everything worked great together to create different looks during each show,” said Kay. “This has been a big year of MGK; his career has zoomed up to new levels, so we wanted to reflect this by changing up the lighting from anything we’ve ever done before.  The Nexus was key to helping us realize this vision.”