NEXUS Comes Through At SXSW 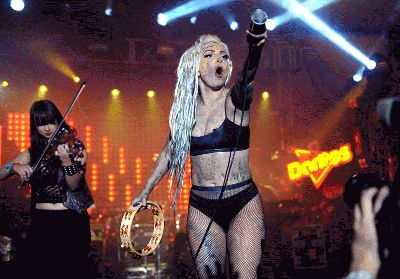 Sometimes the most inspired results are unplanned. Such was the case on Thursday March 13 for LD Cory Fitzgerald, production manager Michael Alegretto and Todd Roberts of Visions Lighting (Brea, CA), when they had to adjust to a sudden change in venues for Lady Gaga’s performance at the South by Southwest (SXSW) Music and Media Conference.  Despite a very tight (8-hour) setup time resulting from the venue switch, the team created a stunning lightshow with some help from 60 Nexus 4 x 4 panels from CHAUVET Professional.

“Originally Lady Gaga was slated to perform at Doritos’ large vending machine, and at the last minute the city denied Doritos the permit because the venue was too small; somehow they were able to secure Stubbs (an outdoor barbeque restaurant) a couple blocks away that could hold a significantly larger amount of people,” said Roberts. “Cory Fitzgerald was tasked with designing a system that would fit the creative and fit on a rather small stage for that large an act. Creative had renderings that showed what looked like a wall of light fixtures, and we all instantly knew what would work for that – Nexus!”

The compact size (18.25” x 18.25” x 8.27” per panel), easy linkable interlocking hardware and intense brightness (484 lux at  5 meters) of the Nexus 4x4 COB LED panel made it well suited for the job of creating an impressive light wall on a relatively small stage. According to Roberts, the brilliant output of the Nexus panels worked well to balance the strobes and moving head beams that were used in the lightshow.

Made of lightweight, but stable and rugged aluminum alloy and steel, and offering seamless connectivity, the Nexus also helped the Visions Lighting team set up the SWSX rig within a very tight time frame. “We were able to prebuild towers at a separate location and bring them into Stubbs,” said Roberts. “We had to load in at five in the morning and be ready by 1:00 PM for rehearsal. The Visions Team of Colin Johnson, Rick Prather, Rafa Avila, Canin Campbell and Jairo Ortiz did an amazing job of prebuilding the lighting towers offsite to speed up the same day load in.

“I also really have to give Lady Gaga’s team credit for wanting to do the best possible show with lots of custom elements just for this event,” continued Roberts. “Lighting design and operation by Cory Fitzgerald was excellent and we’re thankful to New Creatures and Fuse TV, along with Michael Alegretto for involving us in this project.”

Although staging Lady Gaga’s performance at Stubbs was unplanned far in advance, the lightshow certainly wasn’t unappreciated by the 2,000 fans in attendance. The lighting was flawless, the result of a consummately professional team working with excellent fixtures like the Nexus 4 x 4 panel.