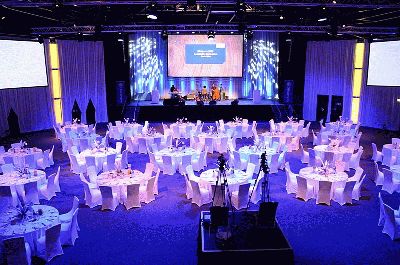 It was attended by about 260 Discovery staff members including those who had recently completed various forms of training offered by the company.

The MJ crew rigged two production trusses over the audience to provide lighting positions for 16 Robe LEDWash 600s, which were used to create a smooth and even colour wash over the dinner tables in the auditorium.

The rest of the lighting fixtures were flown from the venue’s house bars.

A total of 24 LEDWash 600s were used. The other eight units were rigged on the over-stage bars and used to down light the stage and back light the performers which included up-and-coming singer / songwriter Terniell Nelson. Two LEDWash 600s were also used as rear accents on the lectern area for speakers and presenters.

The Robin 300 Spots were primarily used to create textures on the draping around a central upstage screen, and also for movement during the performance sections of the show.

The LEDWash 600s are currently Francois’ favourite fixture in MJ’s busy warehouse – again due to the intense power and low power consumption. He intends to start using them for the house lighting at events, as their 15 – 60 degree zoom and soft, smooth output is ideal for this application.

The energy-efficient LEDWash series is ideal for any venues that don’t have three phase power. The full range of whites available - which included authentic tungsten emulation - is a great bonus for shows that are lit for television or video.

MJ currently has 24 LEDWash 600s and 24 ROBIN 300 spots – amongst many other Robe fixtures in their stock and have immediate access to more fixtures through cross rental from other suppliers of Robe.