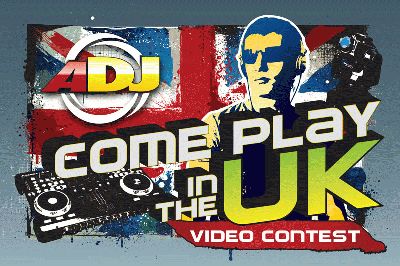 American DJ, American Audio and Arriba Bags are holding a contest with a prize that isn’t quite out of this world, but is sure out of this continent!  The companies are offering an all-expense paid trip for two to the BPM 2011 DJ Show in Birmingham, England from October 1-3, 2011. (The total trip length is from September 28 through October 4, 2011.)

Entering to win this dream prize in the Come Play In The UK contest is pretty simple – and a whole lot of fun. Contestants just have to submit a video explaining which European musician (living or historical) they would like to meet and which American DJ lighting product they’d like to give their musical hero.

These videos must be submitted as a “video response” to Brian S. Redd’s YouTube channel video:  (http://www.youtube.com/watch?v=IPXpXUqLlH0) Videos must also be submitted by the contest deadline, which is  June 30, 2011 at 11:59 PM Pacific Time.

American DJ welcomes creativity in Come Play In The UK contest submissions. Contestants can select a musical hero from any musical genre, from techno to Tchaikovsky; they can communicate with this artist through the Internet or a séance –or do anything else that strikes their imaginations.

The company only stipulates that the videos be 100% original, contain nothing lewd or offensive, or do anything that endangers people or animals.
The contest is open to all legal US residents over the age of 18.  Official contest rules can be found on the company’s website, http://www.americandj.com/ProductDetails.aspx?Category=&ItemNumber=2050

First prize in the contest is an all-expense paid trip for the winner and a companion to the BPM 2011 DJ Show in Birmingham, England. This includes round trip coach/economy airfare from the winners’ home city to the United Kingdom, all ground transportation in the United Kingdom, hotel accommodations (standard room double occupancy), entrance to the Beatles Magical Mystery Tour in Liverpool, 500 British Pounds spending and meal money, and three Arriba bags of choice.

Aside from its great grand prize, American DJ will be giving away some very cool consolation prizes:

Second Prize: is a VMS4 Traktor Digital Work Station, an American DJ Nucleus Pro and one AS-190 Arriba Case (fits the VMS4).

“We’re very excited about the Come Play In The UK contest,” said Brian Dowdle, marketing manager of American DJ, American Audio and Arriba Bags. “In February, our European office flew a DJ from over there to Las Vegas to attend the Mobile Beat Show. Now, we’re returning the favor by sending someone from here to the BPM DJ Show in England.  This is our way of saying thanks to the international DJ community, and promoting the global exchange of DJ-ing around the world.”