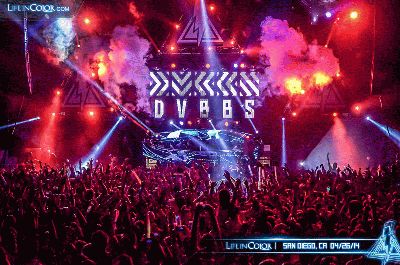 Staying on the cutting edge isn’t easy, especially when you’ve had the level of success that Life in Color has enjoyed for almost a decade.  Yet, the organizers of this iconic EDM touring event have refused to let complacency rear its tired old head anywhere near their wild, wonderful and totally unpredictable paint party-music fest. Every year, they manage to blow past expectations, and delight the senses in new ways.  The 2014 Unleash Tour is no exception, thanks in part to a visual hurricane force of a lightshow created by technical director Collyns Stenzel and Duncan MacKinnon from Audio East.

“We created an entirely new show that is unlike anything we’ve done before,” said Stenzel, who added a variety of CHAUVET Professional products to his rig for 2014.  “The theme of this tour ‘Unleash’ celebrates the freedom to cut loose and be yourself without worries. Our goal was to convey this with a lightshow that had a lot of intensity, even more color than usual and some special outside the box mapping.”

At the core of the Unleash design and dominating the stage are three scrimmed triangles surrounded by light. The triangles create an ethereal look on stage to reinforce the freedom message of the Life in Color Tour. “It was a bit of a challenge to design with triangles, because there are so many orientations to deal with,” said Stenzel. “We’ve had to tweak the focus at each show because every venue is a little different, but the end result has been worth it.”

Stenzel used 27 of the COLORado Batten 144 Tours to outline the three triangles over the Life in Color stage and illuminate the scrim, and another 11 pieces of the fixture to light the top and bottom of the upstage wall.  He has nothing but praise for these units. “The COLORado Batten 144 Tour is a very solid unit with a long throw, and it gives me great colors, which is obviously very important in this application,” he said. “It was essential that the triangles have a very vivid and dramatic look so they could accent the action on stage. The COLORado Battens are very bright; even in a rig that has a lot going on, they can take command out of sheer brightness and stand out. So they worked very well outlining our triangles.”

A batten style wash, the COLORado Batten 144 Tour has 144 calibrated red, green, blue, white and amber LEDs and five dimming curves.  In addition to creating the rainbow of colors Stenzel wanted on the scrims, the fixtures also played what the LD calls “an essential part in creating some great spatial mapping” that he plans to add to the Unleash tour. “We’ll be introducing this to our show very soon and it should be special,” he said.  “Our new setup involves the ArKaos LED mapper with the MA2 to switch color and dimming control between both the MA and the video. It's pretty neat.”

A mainstay of the Life in Color Unleash design is MVP 18 LED Video Wall Panel. “We have 45 MVP 18 panels on the upstage wall, with six 4-lamp moles and six strobes attached to the rear of the panels via their convenient M10 threads. The end result is a very powerful display where the video panels and fixtures play off one another. We can do this with the MVP panels, because they have the brightness to hold their own without being drowned out by other bright fixtures,” said Stenzel.  “The MVP 18 has become a staple on all of our shows. It's rugged, reliable and versatile -- everything you could ask for in a good solid LED video panel.”

With a pixel pitch of 18.75 millimeters, a 4,300 nit rating and 38% pass-through rate, the MVP 18 LED video panel provides the intensity, brightness and transparency needed for the festival’s lightshow. The panel’s 140° viewing angle also helps ensure that the entire audience is swept up in the lightshow.

Indeed, audiences around the world are being swept up in Stenzel’s Unleash design. Life in Color has played to packed houses in Europe, Asia and Latin America in addition to cities throughout the US.  With stars like Afrojack, David Solanao and Benny Bennassi on its bill and 500,000 tickets to its performances sold every year, its position as one of the leading music festivals seems secure.

Still, this has not kept Stenzel and the other creative forces behind Life in Color from pushing the envelope and upending the status quo in search of the next new, different and exciting idea “I think the more effort you put into anything, the greater it becomes,” said the LD. “We are trying to give the audience an exciting five-hour show that they'll never forget, and I think we are hitting right on target. As part of this, we’re always counting on manufacturers to come out with new products that blow the previous versions away. I can't wait to see what Chauvet has in store next