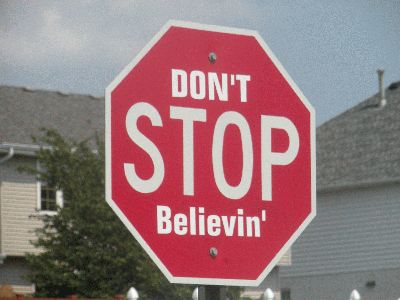 Insurance.com commissioned a survey of 2,000 drivers and asked them to choose the best and worst songs for driving, as well as music that they secretly listen to in the car.

Rounding out the top five were Queen's 1975 rock-opera "Bohemian Rhapsody," AC/DC's classic "You Shook Me All Night Long," another Journey tune from the 80s, "Any Way You Want It" and Tom Cochrane's 1991 hit "Life is a Highway."

The following percentage of voters chose these songs as the best car music:

Percentages total more than 100 because respondents were allowed to choose up to five songs.

"Some people mock the Bay Area balladeers, but there's no denying Journey has a fan base, given they took two of the top five spots for songs that people enjoy when driving," said Michelle Megna, managing editor of Insurance.com.

Respondents could also provide their own picks for songs that make you want to crank up the volume when behind the wheel. "Highway to Hell" by AC/DC , "Radar Love" by Golden Earring and "I Can't Drive 55" by Sammy Hagar topped the list of write-in choices.

One-hit wonders The Baha Men, country-crossover superstar Taylor Swift and the iconic Cher take the top three spots for songs that make drivers want to change the station immediately. The following percentages of voters chose these songs as the worst car music:

Drivers were also asked to write in the names of songs and artists that make them want to tune out immediately. "Baby" by Justin Bieber, "Wrecking Ball" by Miley Cyrus and "any type of rap" were among the most popular losers.

Dude, you so listen to Adele!

When asked what bands ,artists  or stations they listen to when driving that they don't make known to others, Bruno Mars, Taylor Swift and Lady Gaga were knotted up in the top three spots. Among drivers who have guilty-pleasure listening favorites, here are the top picks:

“Strictly from data analysis we can surmise that the ideal driving songs would be duets with Bruno Mars and Taylor Swift singing old Journey favorites,” said Megna.

Read the full article at: http://www.insurance.com/auto-insurance/safety/best-and-worst-driving-songs-survey.html