Representing the next generation of its groundbreaking and industry-standard EON® series portable loudspeakers, today JBL is introducing the EON500 series. The unveiling of the EON500 series self-powered and lightweight speakers immediately raises the bar in the category of molded powered loudspeakers.

"Since its introduction in 1995, the EON series has led the way in terms of versatility, performance and value, as evidenced by the sale of nearly one million EON speakers to date," said Simon Jones, Director of Marketing, Portable PA, JBL Professional. "Thanks to the acute attention to detail in the design engineering of EON, the highest level of quality is delivered to the end user. JBL has developed the new EON500 series loudspeakers with this same dedication to performance and reliability, while increasing portability, through an even lighter system and designed ergonomics. It has more performance, it’s lighter and it’s even easier to move around."

The unmatched reliability of the EON500 series loudspeakers is the result of JBL’s integrated design of the woofer, amplifier, wave guide and thermal management of all components. Additionally, all electro-acoustic components have been specifically engineered for the EON system. Because the features and manufacturability of the system have also been developed in unison, the highly refined production process contributes to the reliability of the products. 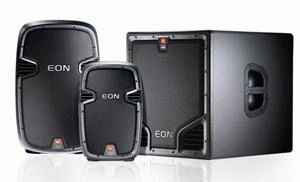 The EON515 and EON510 are both 2-way powered speaker systems, offering mic and line level inputs, as well as selectable system EQ, giving users a "loudness" type control and the ability to roll off the low frequency for maximum performance with a subwoofer or when used as a floor monitor. Both models feature one XLR/ quarter-inch combo connector and additional quarter-inch inputs providing input flexibility and the ability to mix multiple sources. Each loudspeaker features one XLR output where the output signal is selectable, either the whole mix may be looped to another speaker (or sent to a mixing console), or simply the primary input for traditional "daisy-chaining."

The EON515 is a 15-inch 2-way loudspeaker system offering a total of 450/900 watts (continuous/burst) power. All power in the EON515 is derived from latest Crown® Class–D technology; it’s highly efficient, compact and incredibly lightweight—less than 33 pounds (15 kilograms). The EON515 offers a 15-inch Differential Drive® woofer, a compact high-performance compression driver with a 1-inch exit and neodymium motor on a 100° x 60° wave guide.

"Once described as ‘the ultimate workhorse, utility loudspeaker,’ the success of the EON line is based on its broad appeal, ranging from simple PA applications to professional sound reinforcement, making it extremely useful for DJs, musicians, major rental companies, schools, churches and institutions alike," Jones added. "As with the existing EON lineup, utility will continue to drive the success of the new EON models, which truly represent the next generation in portable loudspeakers."