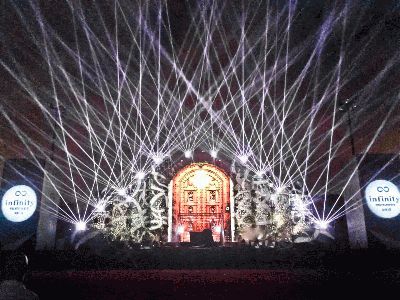 The first Infinity Summer Festival took place on August 8th in Shanghai, being the first interactive carnival themed music festival there: The festival was EDM oriented, with a lot of house and trance music.

The laser show was a central visual element of the event, so the organizers decided to go for high end laser gear of Swiss and German manufacturing: 10 x SwissLas PM-10.000RGB lasers as well as 6 x RTI PIKO RGB 18 were used to make this festival more than spectacular. This whole laser setup had an overall laser power of more than 200W laser power and went very well with the video walls and conventional lighting, as the power was more than sufficient to cover the whole festival area.

Big names like Roger Shah, Dzeko & Torres, Alvaro, Genix and Ben Nicky formed the line-up for the Infinity Summer Festival in Shanghai and made it a great success!