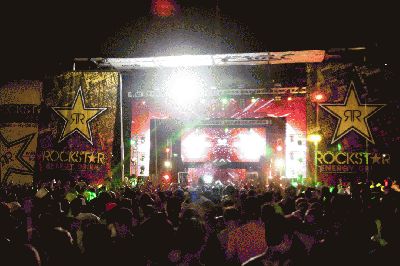 The tour’s star-studded lineup and non-stop action required hard-hitting lighting and video effects that could keep pace with its frenzied intensity.  Yet as with any national concert tour, the gear also had to perform reliably night after night, stand up to rugged travel conditions, and be able to be assembled and torn down quickly.

A total of 28 EPV375 HO panels were used to create the stage’s video wall, which itself presented a unique challenge, because the gear had to complement a proprietary rig brought in by the second stage’s headline act Excision. “The Excision rig was projection on a custom DJ booth, so I had to design a rig that would fit on the trailer stage and leave room for the Excision set piece,” explained Guest.

“I chose the EPV375 HO video panels for several reasons.  They are large format panels 4’x4’, so jumper and power cables are kept to a minimum (compared to) smaller 2’x2’ panels,” said Guest.  Another factor was the EPV375 HO panels’ built-in rigging hardware, power, data distribution and signal processing.  “They rig and hang very quickly.  The system of attaching them to the truss and then to one another is efficient and well thought out.”

Most impressively of all, the brightness of the EPV375 HO stood up to the intense power of Excision’s rig.  “They are SUPER bright . . . 8,000 nits!” said Guest.  “I wanted to be sure we had enough punch to hang with the (Excision rig) on stage.  As it turned out, we ran the video wall at 50% because we had plenty of punch and more.”

The video wall configuration consisted of a main screen behind the DJ made up of 10 EPV375 HO panels and an inverted horseshow on the downstage edge comprised of 18 panels.  “The separation of the two surfaces provided texture and a unique look for all the acts,” said Guest.  “Multiple screens with unique shapes on multiple planes has been a theme in almost all of my recent video designs.  I believe it helps add some artistic feel beyond good video content.”

As for the other two Elation products he used at Identity Festival, Guest had this to say: “I chose the Platinum Beam 5R because of its awesome output (28,360 lux/2,634 foot-candles at 75 feet), as well as its speed and reliability – these fixtures rock.  The Design Wash LED 60 is a workhorse; they just don’t break.”

The stellar visual effects and solid performance provided by the Elation products, combined with the creativity and professionalism of Guest and his Stage-Tech team, earned these words of praise from Identity Festival’s producer John Reese. “Stage-Tech provided a lighting and video rig that surpassed our expectations,” said Reese. “Their crew and equipment were top notch.  In a touring situation where you have no time for foul-ups, Stage-Tech was both proactive and professional with our production team in providing a fantastic solution for our lighting and video needs.”