Having worked with the Arnold Sports Festival as its exclusive provider of lighting and staging systems for over 20 years, Live! Technologies, 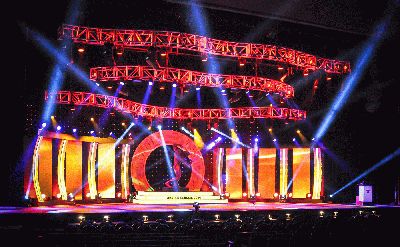 Having worked with the Arnold Sports Festival as its exclusive provider of lighting and staging systems for over 20 years, Live! Technologies, LLC. recently took the show to a new level with an array of lighting elements from HARMAN’s Martin Professional.

“Everything worked out extremely well,” Farrell mentioned. “We started months in advance with the set design and did roughly 100 hours of pre-programming for the show. Other than that, the setup took two days and it was straightforward.”

For both Farrell and Hesmond, it was their first time using the P3-200 Controller, RUSH MH3 Beam lights and Viper Performances. “We used all the moving lights for our stage wash and video lighting, all the Auras for backlight and used the Viper fixtures for the front stage lighting,” Farrell stated. “The Viper is a great fixture to use. It’s nice and bright and has a great color temperature.”

“The video aspect was somewhat new to us, but the lighting system was very easy to use, which gave us great confidence that it would perform as we envisioned,” Farrell added. “The RUSH MH3 Beams are really awesome, they are super bright and punch right through everything. We were really impressed! The Vipers have great color temperature as well. We didn’t have to do much correction with the LED’s to get it perfect, it was a nice surprise!”

“The ultimate measure was seeing the audience’s response when the athletes came out and hit the stage,” Farrell explained. “They were rock stars up there with a bunch of raving fans screaming. The lighting rig really sold the power of these athletes and made it worth every dollar the audience paid for tickets. It will be tough to outdo ourselves next year!”

In addition to Martin, Live! Technologies deployed HARMAN’s JBL Professional VRX and PRX loudspeakers along with Crown’s amplifiers. “We appreciate working with Martin and all the HARMAN brands and look forward to next years show being brighter and even more successful than this years,” Farrell summed up. “This rig is so awesome it should be used for everything!”

Live! Technologies is a national supplier of entertainment and event technology that prides itself on planning, producing and staging live events that exceed client expectations. For more information on Live! Technologies, please visit: www.reallivepros.com