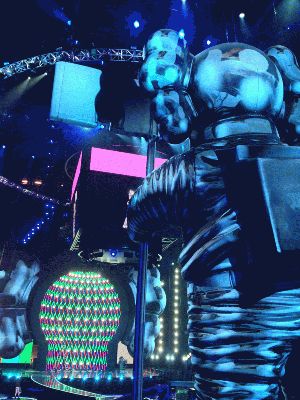 With widespread continued talk on the winners, exciting performances, band reunions and the outfits of those attending, the 2013 MTV Video Music Awards was another spectacular event held at the year-old Barclays Center in Brooklyn.  Looking to deliver world-class lighting in the state-of-the-art venue, Tom Kenny was contracted to design an equally impressive light show to entertain thousands in attendance and millions watching at home. HARMAN’s Martin lighting fixtures, supplied by VER, lined the stage and house, providing a multi-function professional lighting rig.

Kenny, whose illuminating résumé includes lighting design for David Bowie, Eric Clapton and The Who, among others, has been working in and around VMAs production for more than 20 years – designing the lighting for the main show for the better half of a decade. Working with the creative minds of the artists and their own creative production teams, including Brooklyn artist KAWS, who also designed the new MTV Moonman award, Kenny imagined a tremendous design for the arena and its two-stage setup.

More than 100 Martin MAC Auras shined on the diamond-base main stage for performances and presentations. Weight was a major issue with the rig, so the lightweight, functionality and quality of the Auras were a top aspect in Kenny’s design. “We had a lot of lighting throughout the entire show and it was important to keep the rig functional and safe. The Aura’s multi-function capabilities, processing and its beautiful colors were flawless, which was evident during the live show,” Kenny stated.

Another 100 Auras were used as house lights to help radiate the fashion and style of the celebrities in the audience, while numerous Atomic Strobes were used to provide more “flash” to the winners as they were announced and walked up to the stage from the audience.