Viewers of the 56th Annual Grammy Awards got to see glittering recording stars, plus one of the most remarkable TV commercials in memory, both accompanied by some dazzling light from the Nexus 4x4. 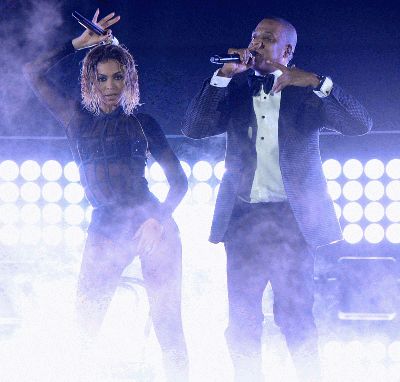 Viewers of the 56th Annual Grammy Awards got to see glittering recording stars, plus one of the most remarkable TV commercials in memory, both accompanied by some dazzling light from the Nexus 4x4. Aside from sizzling on the main stage during the award ceremonies with the likes of Beyoncé and Jay-Z, the high output LED panel from CHAUVET® Professional shined brightly during the Pepsi Grammy Half Time Show, a 2 ½-minute commercial that may have rewritten the book on big event TV advertising.

Filmed at the LA Sports Arena, the commercial featured pro football legends Terry Bradshaw, Mike Ditka, Deion Sanders and Shannon Sharpe.  The tongue-in-cheek spot was based on the simple premise that since music stars entertain fans during football game halftime shows, it’s only right that football stars return the favor by entertaining the TV audience during the recording industry’s big night.

The Pepsi Grammy Halftime Show instantly won over fans and TV critics alike. As the Boston Globe proclaimed, “Pepsi may have given us the best commercial of the Super Bowl a week before the game.” Todd Roberts of Visions Lighting (Brea, CA), which provided all lighting, video and staging for the innovative commercial, couldn’t agree more. “This was an unbelievable experience and I think the results speak for themselves,” said Roberts.  “It was a really exciting ten days for Visions Lighting, from getting the initial call to the completion of the project.”

A total of 40 Nexus 4x4 high output COB LED panels were included in the lighting rig for the Pepsi Grammy Half Time Show.  The Nexus panels, which can be controlled by Art-Net, Kling-Net or DMX protocols, came in for praise from Roberts, particularly for their “camera candy” ability to play well on TV.

“We used the Nexus as riser facia on the EDM stage,” said Roberts.  “The cool thing was we had a Marlite floor, which is high gloss, so in the camera you get the reflection of Nexus panel’s light, which makes it look like we doubled the amount of light. The Nexus panels really popped on camera and everyone loved them.  Some of our team had only seen Jarags before; and they liked the option that Nexus offered of using colors.”

Visions Lighting was hired for the Pepsi Grammy Halftime Show by production company, Holmes Defender of the Faith, with the veteran McG at the lead as the Director. Ramsey Nickell, director of photography for the commercial, thought that Todd Roberts and Visions Lighting would be a great fit to design and provide the elements for the setup, working with lighting director Brandon Dunning.

“When you do a project of this size and scale, especially in such a relatively short time, you need amazing people on the team,” said Roberts, who served as production manager on the project. “The job was a success mainly because of the skill and effort of McG, Ramsey and Brandon as well as Michael Hosanna (video programmer on the main stage); Max Chang and Arturo Perez (EDM stage video programmers); Colin Johnsonn (master electrician); Nathan Jones (CAD drafting); Gilbert Baghramian (renderings); Rick Prather, Rafa Avila, Shaun Grout and Aldo Parenti (electricians); Canin Campbell, Jairo Ortiz, Rudy Carbajal and Braedy Benjamins (video technicians); Daniel Baca and Dave DeClark (staging supervisors); and Greg Kearney (lasers).”

It also helps when that great team has the opportunity to work with intense high output lighting products like the Nexus 4x4 from CHAUVET Professional.