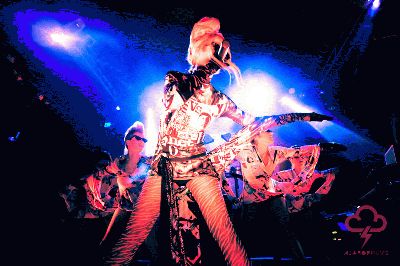 Fans of Jimmy Century, who describe their music as a “spicy cocktail of avant-garde disco, dance and hustle with a twist of Bond, babes and bohemia,” originated in the San Francisco Bay area in 2007 and have since relocated to Las Vegas. The group needed a promotional tool to help them showcase their production to venues in Las Vegas. They teamed up with AJAPOPFILMS http://ajapopfilms.com/, Lawrence Iriarte http://www.ohlone.edu/instr/tv/staff.html, Crew 152 and Hardy Wilson to shoot a music video at San Francisco’s DNA Lounge.

The band is comprised of three members: Alicia Perrone, lead singer; Lion Bellamy Chiu, drummer, keyboardist and composer; and Victor James, guitarist, keyboardist and composer. Chiu, who is also the band’s lighting designer, specified the use of all CHAUVET® fixtures for the video shoot. With the help of James, who is also the band’s technician, Chiu programmed the light show and ran it in synch with “Mr. Las Vegas,” the song performed in the video.

Since Fans of Jimmy Century places just as much emphasis on their visuals as they do on their music, Chiu designed the lighting scheme to make their production appear larger than life. Five LEDrain™ 38C , two SlimPAR™ 38 and two LED PAR 64-36VW B  PAR can-style wash lights created a lighting effect from both sides of the stage and uplit the drum rig. A Double Derby™ X effect light, and Scorpion™ GBC and Scorpion™ RVM  lasers projected dynamic background effects from the front of the drum rig. Four COLORpalette™ fixtures surrounded Chiu’s drum set, transformed to resemble a spaceship’s cockpit from Star Wars, with one placed center stage to uplight Perrone and her dancers. The addition of two Hurricane 1800 Flex fog machines enhanced the lighting effects.

“I chose CHAUVET® lights simply because of their versatility, durability and sleek design,” Chiu said. “Each fixture includes a multitude of programs to make our show appear that much more dynamic.”

It took Chiu and James more than an hour to mount and position all of the fixtures and eight hours to program them. The team controlled the lighting rig with an Obey™ 70  DMX controller, routed to a Macbook Pro  with Ableton Live 8 live-8 using a MIDI cable, and a DMX-4 Dimmer/Relay Pack.

“The capabilities of these fixtures are pretty much endless and my programming only touched the surface,” Chiu said. “They were simply amazing and brought an atmosphere that helped the band create and maintain a consistent fantasy throughout the shoot.”