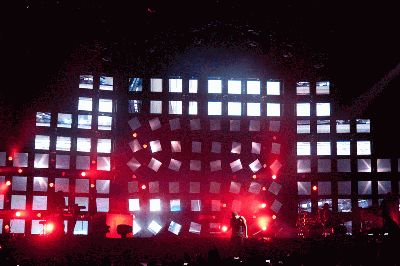 Like the Canadian rapper himself, the stage production for Drake’s Club Paradise Tour is bold, strong and masculine with a commanding presence. The focal point of the set is an industrial-looking backdrop, made up of 40 6’x6’2’ alloy frames, each harboring a number of integrated lighting and video elements, which serves as a fitting marquee for the actor-turned-singer, who burst out as Billboard’s “Top New Hip Hop/R&B Artist” in 2009.

It took an artful balancing act to turn this cutting-edge trove of technology into a stunning visual concept that, at the same time, wouldn’t overpower Drake and the hip-hop power players who perform with him on the club-themed tour, now entering its second U.S. leg.  Among the individuals credited with walking this fine line are the tour’s creative director Willo Perron and lighting designer Patrick Dierson.

From both a design and functional perspective, the self-contained alloy frames – called “Paracubes” by the creative/production staff -- were key, said Dierson.  Each cube is pre-rigged with its lighting and video contents, so that the units can be set up almost “modularly,” saving considerable loading time.  Aesthetic-wise, the diverse elements in each Paracube allow for the creation of some very different and unique looks. A real standout on this count has been Elation Professional’s EPV762 MH Moving Head LED Video Panel, which is mounted at a 90° angle, yoked out and spaced congruently with other video products within each cube.

A 7.62mm-pixel-pitch 19.2” square panel containing 3-in-1 RGB SMD LEDs, the EPV762 MH is capable of panning a full 540° and tilting 265° like a moving head light fixture.  The innovative Elation panel was “an integral part of our design and we really wanted to see what they could do,” said Dierson, who used 48 EPV762 MH units on the first leg of the tour. In addition to serving as moving video displays, the idea was that the articulating panels could be used without video as moving surfaces to reflect other light sources.

The effect created when the EPV762 MH panels start moving during the show has more than lived up to expectations, reports Dierson, producing  a massive visual display “akin to the look of a huge cathedral  pipe organ.” “The audience really does a double-take the first time the video panels start moving,” Dierson said.  “The effect is done as a very bold statement, where the video image fades to a solid color video wall as the panels start to undulate. As the more ‘realistic’ video footage starts to come back into play, the audience is only putting various pieces of it together as the panels line up in various, random places within the design.  Eventually the movement settles to reveal an image that’s seemingly back to normal. . for the moment.  Aside from that, using the panels as surfaces for other lighting instruments to play off of allows us to produce some really fantastic effects, both with video playing on the panels and without.”

Although he has gotten a lot of favorable feedback from industry peers who have seen the show, “nothing trumps an audience reaction,” Dierson adds.  “To stand at FOH and just watch people’s faces the first time the panels start moving is proof of the entertainment concept and completely justifies the product being there.  Those are the moments that you strive for as a designer.”

On top of that, the EPV762 MH panels have proven reliable workhorses on a tour that after finishing its first U.S. leg in March, headed off to Europe, and is now back for another series of coast-to-coast performances.  The panels have “performed remarkably well considering what we’ve put them through,” said Dierson.  “Let’s face it.  It’s a moving video panel being bounced all over the planet and then put through its paces rigorously.  There are bound to be similar technical issues that you would expect from either one of its moving light or video panel brethren.  The units are pre-rigged into our scenic Paracubes and very well protected and supported. That being said, they’ve also been shipped like that all around the world, so they go through a lot on a daily basis and still keep performing very well.”

Proof being in the pudding, Dierson says that from the 48 EPV76 MH units originally specified for the Club Paradise Tour, “each subsequent leg has seen the number grow, as we’ve fallen in love with the unit.  Our latest leg of the tour, which sees Drake back in the U.S. in May, takes the EPVMH count up to 96.”