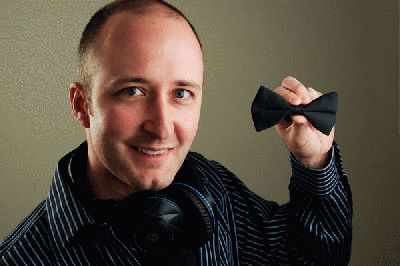 Being a DJ is not just about getting great gigs, it’s about giving advice and helping out fellow DJs. In Budd Moyer’s case, his advice earned him a trip to the 2013 Mobile Beat Show, as the grand prize winner of the “DJ Quick Tip Contest” sponsored by American DJ. The prize included an all-expense paid trip for Moyer and a guest, including airfare, ground transportation, hotel accommodations and free passes to attend the American DJ Customer Appreciation Party, starring Crystal Waters, on Tuesday, February 5.

Budd Moyer, primarily a wedding DJ, submitted the tip, “Try to get the names of those making requests.  It can help pump up the crowd on a song that may not go over well otherwise.” With over a decade of DJ-ing under his belt, his quick tip is based on experience. Budd Moyer has been DJ-ing since 2000. In 2006 he moved to Arizona and started Black Tie DJ PHX. Since he began Black Tie, he has shown off his skills at countless venues for thousands of guests. When he is not DJ-ing, Moyer loves to spend time with his family and likes to stay active.

Moyer has chosen a mentor of his, Robert Walk, to be his guest. Moyer refers to Robert as someone who has made an “immense impact” on his career over the last year. Moyer said of Robert, “My family and I are grateful for him, and I want to thank American DJ and Mobile Beat for providing me a way to show it.”