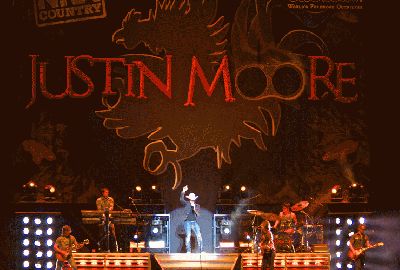 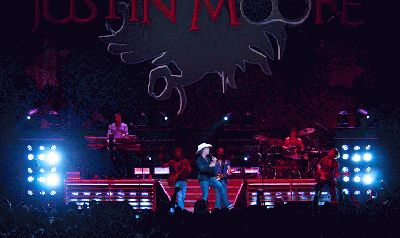 Lighting Designer Sooner Routhier specified 44 Legend 412 fixtures placed in custom-made wood carts behind the singer and symmetrically on the left and right side of the stage. “We needed to make sure that the floor package we used was easily configurable to accommodate the many different stage sizes,” Routhier said. “It needed to expand and contract based on the various widths. Luckily, the lighting company — Special Event Services — had some custom-built carts that they modified in order to pack lots of lights into small spaces.” These props allowed the tour to set up a floor package and tear it down in record time for festival and opening act situations. “Justin [Moore] also requested a riser configuration and we needed to make sure that the lighting system complimented the riser setup,” Routhier said. “The floor carts full of Legend 412 did this very well.”

Touring Lighting Director Aaron D. Luke said the Legend 412 fixtures performed flawlessly, considering the limited time they had for setup as the opening act. “Legend 412 did a good job,” he said. “Having the carts on the sides made the stage look bigger.” Luke was very impressed with the CHAUVET Professional luminaires. “I liked how they held up throughout the tour and the 168 shows. They saw a lot of travel and abuse. Plus, they are bright and quick.”

Routhier used every feature possible feature the Legend 412 offers. “The quadrant LED effects were really fun to play with,” she said. “We were able to develop some nice chases with those. They also created some different shapes and beams when only one or two of the quadrants were on. The quality of white light was fantastic.  Also, since they were in medium-sized banks, I loved that we could do some beautiful wave-like effects with the pan and tilt functions.”