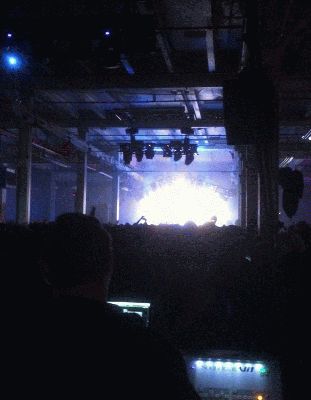 The “Secret Warehouse” on Atlantic Avenue in Brooklyn is really not that secret. In fact it’s one of the epicenters of the borough’s bustling nightlife. Surrounded by chic sushi restaurants and tapas bars, it hosts concerts by some of the hottest names in EDM.  It’s not surprising that sick beat masters Dada Life and special guest Grammy winner Paul van Dyk kicked off the start of their Compound Tour with a concert at this evocative urban venue.

Holding an EDM concert at an abandoned warehouse in the borough that brought us Jay-Z has undeniable street cachet. However, it can also present power draw issues when trying to create a high impact lightshow.  Kevin Mignone of KM Productions met this challenge at the Dada Life concert, which was produced by RPM Presents, with some help from Next NXT-1 moving LED panels and Legend 330SR Spot moving fixtures from CHAUVET Professional.

“The warehouse is a very cool venue for an EDM concert, but no doubt there were challenges,” said Mignone. “We had only 400 amps for the entire show.  This made it necessary to utilize as many low-power but high-output fixtures as we could. The NXT-1 provided an excellent wash across the entire space. We used them for eye candy effects above the crowd, utilizing the preset macros.  Being LED, they were very energy friendly, so they gave us great visuals without sucking up a lot of power.”

Mignone used six Next NXT-1 panels and 12 Legend 330SR moving spots in his Secret Warehouse rig.  The fixtures were hung on overhead truss in groups of six – two LED panels and four moving heads.  Together they provided a sweeping, intense and colorful effect over the crowd of 3,000 EDM fans, despite the historic venue’s low ceilings.

“This building is very typical of your old-style New York area warehouse, so it wasn’t set up to be a concert center,” said Mignone, who constructed a 16’ by 24’ temporary stage for the Dada Life and Paul Van Dyk concert. “There are a lot of old architectural elements here like large support beams located throughout the entire area, low ceilings and different nooks and crannies.”

With a zoom range of 5°-24° and a powerful output from its OSRAM Sirius lamp, the Legend 330SR Spot was ideally equipped to handle the sometimes challenging angles Mignone had to navigate at the warehouse.  The rapid movements and abundant output of the Legend fixture allowed Mignone to create aerial effects over the crowd without consuming an inordinate amount of power.

“We got a lot of bang for the power drawn from the Legend 330s,” said Mignone. “The 330s provided a nice textured effect through the fog and haze in the venue. We used them throughout the area and we had intense light all over the place. As far as the crowd was concerned, the lighting made them feel like they were at a modern concert venue even as they enjoyed the ambience of this historic warehouse.  RPM Presents put on an excellent event and I was happy the lighting contributed.”