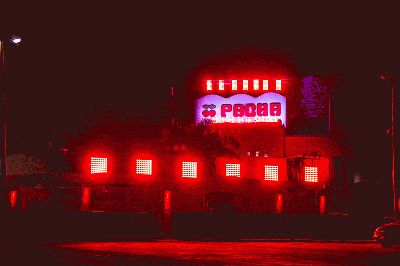 CHAUVET Professional’s Parnelli Award Winner for Indispensable Technology Nexus 4x4 impresses once again in Buenos Aires, firing up Pacha club’s 20th anniversary. For a night of exquisite music and high-profile guests, Gerardo Barcella of Barcella Group Lighting Rental used 48 Nexus 4x4 on the white façade of the club, which stood out from afar. Mostly displaying a pure red, the light from the fixtures matched perfectly with the white venue, reflecting the colors from Pacha’s logo, the well-known red double cherries. The evening gathered a crowd of about 3,500 visitors, who partied well into the night.

“We placed the Nexus strategically on the façade of the club, bringing attention from a nearby highway and making it even more visible from the shore of the River of Silver, which is very close to the club,” Barcella said.

The fixtures were programmed to display text about Pacha’s 20th anniversary and also projected diverse effects. “I suggested the use of Nexus for its impact and great pixel-mapping capabilities,” Barcella continued. “The visual attraction is very strong with the Nexus, and I think it is very versatile due to the various ways it can be programmed: Art-Net, DMX, Kling-Net. Today we program a lot of fixtures with video software and Nexus fitted our equipment and needs very well.”

Nexus 4x4 is both a bold eye-candy and a tour-ready wash light, capable of delivering at once the sizzle of a pixel mapping display and a robust light output afforded by 16 27-watt RGB COB LEDs. The combination of COB emitters and a clever reflector design yields a striking, diffused light richly drenched in saturated hues. Nexus 4x4 is controllable via Art-Net, Kling-Net and DMX protocols and features interlocking hardware to build large arrays. Whether in use for front viewing or as a backdrop, Nexus 4x4 promises a hard-to-match visual impact.

The first Pacha club was opened in Sitges outside Barcelona in 1967. The Ibiza club, located in Ibiza Town, is the best-known venue today. Pacha franchises are in 12 countries around the world: Austria, Brazil, Egypt, Germany, Morocco, Poland, Portugal, Russia, Spain, Argentina, United Kingdom and the United States.