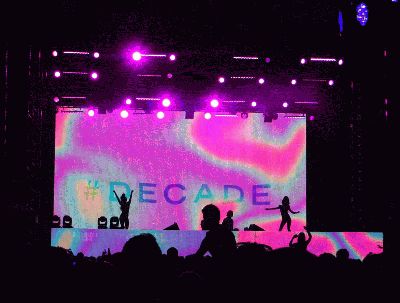 Steve Angello and the Swedish House Mafia made a habit of breaking barriers, not just with the raging creativity of their music, but also with their choice of concert venues.  Never ones to limit themselves to big halls, SHM preferred unorthodox settings for their epic EDM throwdowns. Now as a solo superstar, Angello is continuing this tradition. At the start of Miami Music Week, the iconic DJ held his #Decade concert at an abandoned RC Cola plant off 1-95 in the city’s Wynwood section, performing on a giant stage backed by a massive wall of MVP 12 LED video panels from CHAUVET Professional.

Provided by cross rental house Design Oasis (Davie, FL), the MVP 12 video wall measured 38’ x 20’, making a bold statement that commanded instant attention. The dramatic wall even garnered its own rave reviews from music critics, one of whom, writing for the Miami New Times, marveled that the “massive LED panel setup… consumed one's entire field of vision,” noting that “I can only describe it as Ultra-level quality.”

Luccas Olveira, co-owner of Design Oasis, observed that the MVP 12 with its 4,850 NITS illuminance and 12.5 mm pixel pitch was able to deliver the brightness and intensity demanded by the concert setting.  “The old RC Cola plant is a local icon,” he said. “It’s a massive concrete and steel structure with a lot of graffiti and a huge parking lot, so it’s kind of easy for a stage to get lost in this compound, but the PVP S5s really served as a great anchor for the whole lightshow. We had the large video wall behind the stage and a band of video panels in front to create a very nice multi-dimensional look.”

With a 140° viewing angle, pixel density of  6400/m2 and an IP 54 rating, the MVP 12 was ideal for the big outdoor stage, which was set up on one end of the plant compound’s parking lot.  The panels’ 13.4 percent transparency worked well to allow other lighting elements of the show to pass through them.

“The panels looked good from every viewing angle,” said Abbas Ritscher, another Design Oasis co-owner. “They were also bright enough to make a strong visual impression during the earlier performances, which took place when it was still light out. Jon Triccas, the lighting designer, VJ Josh Gallagher, and production designers John Ferlito and Mark Underwood all deserve a lot of credit for making this a success.”

Produced by Mix 3 Sound and SRX Events, the #Decade concert was held to celebrate the 10th anniversary of Angello’s Size Records label. In addition to the former Swedish House Mafia member, the concert featured a galaxy of EDM stars like Thomas Gold, Sunnery James & Ryan Marciano, AN21 & Max Vangeli, and more. It was a totally immersive experience for the thousands in attendance – not just for the music, but for the setting, which in true SHM fashion created a visual impression that no one who saw it is likely to forget.