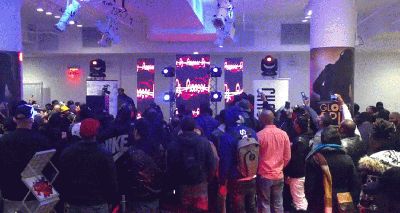 Lighting designer Jason Ayala was understandably excited by the thought of doing an event for the Global Spin Awards at Manhattan’s Metropolitan West, not just because of the prestigious client, but also because of the venue itself. Like many New Yorkers, the LD had a special affinity for the sturdy two story building at 639 W. 46th Street in the city’s Hell’s Kitchen neighborhood.  Prior to becoming the go-to place for chic events like Versace’s NY Fashion Week Runway Show, the 12,000 square foot building had achieved iconic status in the city as the home of H&H Bagel, the world’s largest bagel factory, which at one time turned out over 80,000 of the hard circular rolls a day. The closure of H&H facility after its owner was indicted for tax fraud and its subsequent rebirth as a premier event center only enhanced its mystique.

As Ayala and his production manager Jeffry Kwan of Canal Sound and Light discovered, however, even the most enchanted buildings can hold surprises when it comes to lighting design. The stunning display that the LD created using PVP S5 LED video panels and Rogue moving fixtures from CHAUVET Professional had to undergo some significant last-minute adjustments to account for the venue’s relatively low roof.

“This design was for the Global Spin Awards Expo, which is held in conjunction with the Global Spin Awards, a very prestigious event featuring superstars like DJ Skribble and the finals of the McDonald’s Flavor Battle DJ Competition,” said Ayala. “Our goal was to create a stage lightshow at the expo that made everybody who appeared feel like they too were a superstar in their own right.”

To engender this feeling, Ayala came up with a design that featured a wall of PVP S5 LED panels arranged in diamond configurations. Although drawings indicated that the ceiling was high enough to accommodate this stage design, it turned out that this was not the case in the section of the venue where the stage was set up.

“We simply didn’t have the height to do what we wanted,” said the LD. “It was just a couple of days out when we learned about the height issue.  So, we went into Vectorworks and reworked the design.”

This reworking involved breaking the video display into three sections: a 23’ x 4’center flanked by two 1’ x 4’ outer sections. We created industrial looking patterns to go back and forth between the different panels,” said Ayala. “By pixel mapping images to run through all three sections, we gave the stage a sense of movement to generate more excitement than we could get through just a single video wall.”

Still, the tri-section wall by itself did not match the sort of superstar looks that Ayala and Kwan envisioned from the diamond configuration. It was then that some Rogue R1 Beams stepped in to fill the design gap – quite literally.

“I worked with Jeff to have four Rogue R1 Beams fill the spaces between the main video wall and the strips on either side of it – two beams in each gap,” said Ayala.  “The beams have a very intense output, but they didn’t overwhelm the video panels, because they were very bright too. Shooting the beams out at the audience between the industrial video images shown on the video panels created a very bold image and got the crowd caught up in the action on stage.”
Adding to the intensity of the stage presentation were four Rogue R2 Spots. Ayala flanked the stage with these fixtures for side lighting and as a means of adding depth to his design with logos and rotating prism effects. “There’s a lot of things you can do with the Rogue R2 Spot, and we probably ended up doing all of them to add some punch to our last-minute design,” said Ayala. “We did a lot split colors and changed gobo shapes, you name it. We had to do some last minute scrambling, but in the end the audience and the client were enthused and that’s the main thing. As far as Metropolitan West goes, when all was said and done, it was an amazing venue.”