CHAUVET Is Cool On Dance Floor 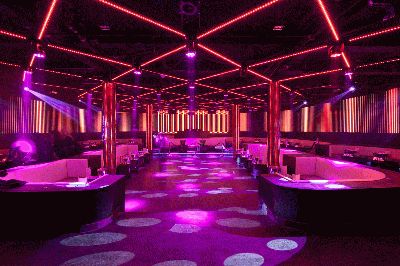 Jaded New Yorkers don’t often buzz about a club opening, but then the new VIP Room, which recently opened with great fanfare in the city’s meatpacker district, is no ordinary nightspot. Created by legendary French impresario Jean-Roch, the new 5,000 sq. ft. club joins four other VIP Rooms located in Paris, Saint Tropez, Cannes and Dubai. Like its sister establishments, which routinely have celebs like Rihanna and Robert De Niro party within their plush environs, the new club has an ultra A-list following and a radiantly stylish lighting design, which in the case of New York includes the Intimidator™ Spot LED 350 from CHAUVET® DJ.

The CHAUVET fixtures served a critical function for LD Michael Meacham of iDesign (Miami), when he created the lighting design for New York’s VIP Room.  Jean-Roch and his associates Shawn Kolodny and Ryan Tarantino sought to create a club that brought French flair and Euro-styling to the hip Manhattan night scene. This required an intense lighting design with a lot of rapid movement and bold colors.

Meacham, whose signature lighting designs have helped define some of the most famous clubs throughout the world, was more than up to the challenge, creating a stunning symphony of light design for the VIP Room. However, with all of the action going on around the dance floor, the Miami-based LD wanted to ensure that light was also focused on the floor itself.

The eight Intimidator Spot LED 350 fixtures that Meacham used in his VIP Room design helped him accomplish this goal. “I am a very big fan of the Intimidator Series, because these fixtures do their job so well,” he said. “In a club setting, the Intimidators have the intensity to project patterns through all of the other effects, so they’re great at focusing attention. At the same time, because they’re LED effects they stay cool and don’t consume a lot of power.”

The most powerful LED spot in the Intimidator line, the Spot 350 uses a 75-watt LED combined with advanced optics to generate a level of brightness that’s more often associated with higher wattage fixtures.  This brightness, along with the crisp rotating gobos that result from its motorized focus, make the Intimidator Spot LED 350 ideal for club applications.

Located in the site formerly occupied by the famous Kiss And Fly Club, the new VIP Room has a stunning panoramic bar and other sweeping opulent design features that give clubbers a taste of France in the middle of New York’s West Village.  This provides visitors with an unforgettable experience, especially when combined with dynamic performances of stars like Wiz Khalifa.

Nevertheless, the building did present a special challenge for Meacham as a lighting designer.  “The ceiling is very low in this building,” he said. “This means we had to work harder to ensure that we got the coverage we wanted on the dance floor.”

Mainly though, Meacham was just impressed with the way the Intimidator Spot LED 350 fixtures performed.  “They were sharp; they were crisp – and they covered a lot of area,” he said.  “Without a doubt, the Intimidators were an indispensable part of the design and they made the dance floor pop.”