CHAUVET Finds a Niche in the Barbecue Market 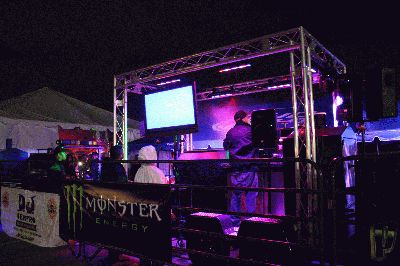 CHAUVET lighting retail dealer Pablo Elizondo figured out how to cash in on Texans’ passion for barbecuing by making his own barbecue pit complete with trusses, lights, speakers, plasma TVs and a DJ stand.
“My main concern is growing my business,” said Elizondo, who owns DJ Centro in Houston. “We can rent it out for parties or do catering.”

Pitmaker, a company located in suburban Houston, custom made the barbecue pit for Elizondo. The giant grill is actually a DJ stand, with the real grill on one side and a smoker on the other. CHAUVET lights including COLORdash Accent, COLORstrip Mini, and Q-Spot 150 LED all help to set the party mood. “We started out with a couple of moving heads, but we’ve added several more” he said.

In February, CHAUVET caught up with Elizondo at the Houston Livestock Show and Rodeo 2010’s World Championship BBQ Cook-Off, as part of the Pitman-sponsored entourage. This cook-off draws as many as700 entrants and Elizondo hoped to be among the winners, but he wasn’t doing the cooking.

“I’m not the best cook, but I’m around some of the best,” he said. “I’m trying to build up my business by selling my product, CHAUVET, and trying to sell to another market. I never thought I would build something like this, I just came up with this idea and told Pitman what I wanted.”