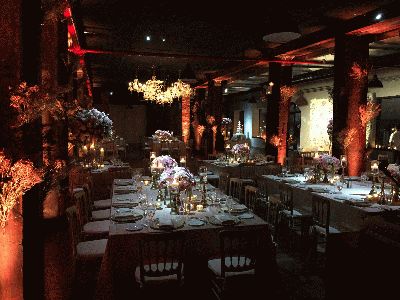 It is one of New York’s chicest event venues. Commanding incredible views of the city’s harbor from Brooklyn’s trendy Red Hook neighborhood, Liberty Warehouse has been the scene of parties for big name celebrities from every field. Jay Z and Beyoncé danced the night away at this Civil War-era waterfront warehouse to celebrate the release of Hov’s Magna Carta Holy Grail. When Hillary Clinton declared her candidacy for the presidency, her first stop in Brooklyn was at a Liberty Warehouse fundraiser.

Not surprisingly, when New York A-listers tie the knot, they often choose to hold their weddings and ceremonies at this prestigious facility. This was the case recently when a prominent event planner got married. She called on Jeffrey Kwan of Canal Sound and Light to light the ceremony. Kwan delivered an elegant lighting package with mood-setting uplighting and stylish pin spotting, thanks to an assist from a collection of fixtures from CHAUVET DJ.

“You might say the pressure was on,” remarked Kwan. “The client was an event planner, so she knew her stuff and the venue is very high profile. I wasn’t worried though, because our team is skilled and experienced and we know that we can rely on the fixtures in our rig.”

Kwan used 30 battery-powered Freedom Par Quad-4 RGBA LED fixtures to uplight the dining area of the historic building. Controlling the wireless fixtures remotely, he was able to change colors during the evening to set different moods.

“Uplighting the room’s brick columns really warmed things up and set an elegant tone for the entire proceedings,” he said. “The colors we were able to get from the Freedom Pars were all very rich and natural looking, which helped our presentations. The fixture’s casing was inconspicuous, so it didn’t detract from the appearance of the room. Of course being that these fixtures are battery controlled, it freed us from having to worry about running cables around the room.”

In addition to the Freedom Pars, Kwan used 28 EZpin IRC fixtures. He positioned the battery-powered LED pin spots around key scenic elements such as gigantic floral displays to accent their appearance. “There were some very impressive floral displays in the room,” he said. “It was a theme running through the event. We gave extra depth to these with the pin spots, which have an impressive light output despite their size. We also accented the wedding cake and the centerpieces on the different tables with pin spotting. In my view, this is a very reliable way to bring out the aesthetics of any key item at a wedding. Since they are also battery powered and have a magnetic base, we were able to easily mount them without running power to all of them.”

For highlighting the dance floor and creating a club-like atmosphere as the evening progressed, Kwan relied on two truss mounted Rogue R2 Spot moving fixtures from CHAUVET Professional. Drawing on features like gobo morphing between the LED fixture’s two gobo wheels, as well as its split color capabilities, he created unique looks that encouraged guests to get up and dance.

“At most weddings, you really want to accomplish two things,” said Kwan. “On the one hand you want to create a sense of elegance, while on the other you want to turn the room into a club-like venue later on. You can do both without a huge number of fixtures if you build your rig wisely.”

When guests at this wedding weren’t enjoying the festivities inside, they could step out on the deck and see another impressive sight: the Statute of Liberty looking right at them. Among its many unique attributes Liberty Warehouse holds the distinction of being the only event venue in New York City where you can see the iconic statue facing front as she looks to her birthplace in France.  On this particular night as she look directly at Liberty Warehouse, the famous lady saw a very good lighting display indeed.