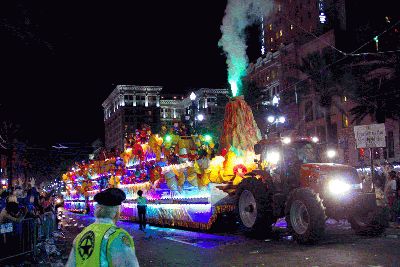 The Krewe of Endymion Parade, started at City Park and Orleans Avenues in New Orleans, and from there took visitors on a journey that figuratively at least reached far beyond the confines of the Crescent City. Built around the theme “Fantastic Voyages,” the largest and most legendary of New Orleans’ Mardi Gras parades, featured floats depicting 20,000 Leagues Under the Sea, Gulliver’s Travels and other tales of transcendent journeys.  Accenting it all, along with 2,650 masked revelers tossing beads to the crowds are Geyser RGB Foggers from CHAUVET DJ and Video Panels from CHAUVET Professional.

“Chauvet products are a key part of our design,” said Ray Ziegler of RZI Lighting (New Orleans), which does most of the lighting and special effects lighting for Endymion. “Being in New Orleans at Mardi Gras, the Endymion floats have to be very lush and rich visually to capture the imagination. Yes, the Chauvet products certainly contributed to this look.”

The Endymion project starts with a series of 45-foot floats which linked together to form a parade train that roll through New Orleans. Each float was decorated to reflect the "fantastic voyage" theme of this year’s parade. “Our goal with the lighting design is to accentuate what the design artist has created on each float, highlighting the various props and adding even more excitement to them without drawing attention away from them.” said Ziegler. “This can create a challenge, given the static nature of the float displays.

“Essentially, the floats are large cars with props that don’t move,” continued the LD.  “So you don’t want to overwhelm the props, the lighting design should make the float more interesting, colorful, and unique”

CHAUVET DJ Geyser RGBs helped add more light and depth to the floats with their streams of colored fog. “The average person looking at the float gets about 30 seconds to view it before it moves further down the street,” said Ziegler. “So we really needed a fixture like this that shoots a quick shot of fog with no re-heating.”

Designed to add drama to any setting, the Geyser RGB blasts a vertical stream of safe, water-based fog while simultaneously illuminating it with 21 high-output RGB LEDs to create streaming 30-foot plumes of color. “We get a lot of excitement out of the Geysers with very little installation time,” said Ziegler, who positioned 10 of the units on his float. “Endymion is near and dear to a lot of people in New Orleans, so we wouldn’t make a decision about gear lightly. I feel good about the Chauvet fixtures and the contribution they can make to our floats.”