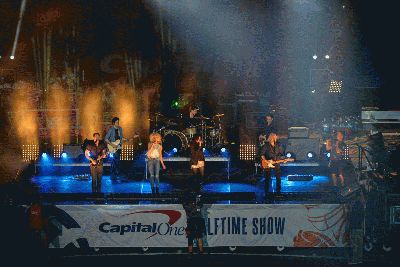 You better bring your A-Game to the Capital One Orange Bowl, whether you’re a college football powerhouse or a top cross rental house/lighting design firm.  Aside from being one of the most prestigious and competitive games in college football, the annual clash of gridiron titans is also a premier televised entertainment event, which in recent years has featured the likes of Train, Kelly Clarkson, Ciara and ZZ Top at its halftime show.

ACT Productions, which has produced the event’s halftime and pregame shows for a decade, knows this. So too does Design Oasis, the cross rental house that specified the lighting rig for the halftime show. That’s why Design Oasis called on six Geyser RGB foggers from CHAUVET DJ to add some extra drama and excitement to this year’s halftime performance, which featured Grammy-winning country superstars Little Big Town.  The foggers, which shoot red, green and blue shafts of LED light through a voluminous column of white water-based fog, played a key role in LD Abas Ritscher’s stunning halftime lightshow.

“Everyone was amazed by the foggers,” said Ritscher, who is a co-owner of Design Oasis. “We positioned the Geysers behind the halftime stage and triggered them to send these huge columns of colored fog in the air at key points in the songs.  They ‘colored’ fog combined with the bright lights in our rig created the party atmosphere that our client wanted. No doubt, they helped us create the impact we wanted on everyone in the stadium as well as the national TV audience.”

The DMX-controlled Geyser RGB sends columns of fog illuminated by RGB light 25 feet in the air. This output was critical to their performance at the halftime show. “Anytime, you’re doing something at a stadium, you have to be aware of how ‘big’ the impact of your gear is going to be,” said Ritscher. “With the six Geysers we had no trouble being right sized for the job.”

Also contributing to the impact of the halftime show were 32 Nexus Aw 7x7 panels from CHAUVET DJ’s sister company, CHAUVET Professional. Ritscher lined the back wall of the mid-field stage with the powerful LED panels and also positioned them over the vomitorium (vom) walkways leading into the field. From these positions, the DMX-controlled panels covered the entire field and much of the stadium with sharp, crisp beams of warm 2800K white light that moved rapidly in vertical waves. “The panels gave us all the punch we needed for this very energized show,” said Ritscher. “They had the output to cover a very large area, and color temperature was great for television. Between the fog from the Geyser and razor sharp Nexus beams, we created something very memorable.”