Manhattan’s Pier 94 has seen a lot of history pass through its 135,000 square feet of space since it opened in 1935 as an ocean liner terminal, but it’s doubtful that this venerable structure, which was later remodeled as an exhibition center, 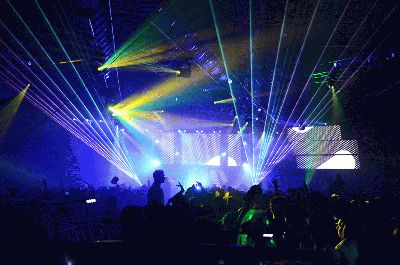 Manhattan’s Pier 94 has seen a lot of history pass through its 135,000 square feet of space since it opened in 1935 as an ocean liner terminal, but it’s doubtful that this venerable structure, which was later remodeled as an exhibition center,  has ever witnessed anything quite like the Pier of Fear. Now in its third year, the two-day festival served up a spectacular Halloween treat for New York’s EDM fans with a stellar lineup of DJs, a colorful array of costumes that were definitely not picked up at Wal-Mart, and a brain tingling lightshow anchored by Next NXT-1 and Legend 330SR Spot fixtures from CHAUVET Professional.

KM Productions of Hicksville, NY set up the lighting rig for the Halloween festival, which is put on by RPM Presents (New York). “This is a major event on the EDM calendar,” said Kevin Mignone, president of KM Productions. “It’s very DJ centric with performers like Knife Party, Adventure Club and Nicky Romero on stage, so our lighting designer Mike Gionfriddo and I wanted a fixture that could really add extra punch to the DJ booth, especially at a long setting like Pier 94.”

The punch Mignone and Gionfriddo were looking for was provided by 13 Next NXT-1 fixtures, which flanked the elevated center stage DJ booth, in addition to being positioned below it on trussing. A moving head panel with 25 pixel-mappable Quad-Color RGBW LEDs, the Next NXT-1 has the intensity to cut through haze and the light from other fixtures, a quality that helped it draw attention to the Pier of Feat DJ booth.

“Everyone was impressed with the forceful visual impact of the NXT-1,” said Mignone. “Mike and I also loved the eye candy qualities that resulted from its bright colors and lightning quick movements. It was an ideal effect to keep up visually with the intense music on stage.”

The Pier of Fear lighting rig, which was controlled by a full-size grandMA2, also included 24 Legend 330SR Spot fixtures. Quick and agile with an extremely bright output of 62,200 lux at 5 meters, the Legend fixtures were used as the primary spot fixture over the stage.

“The Legend 330SR Spots were the workhorses of the rig, hitting the stage from every conceivable angle and engaging everyone in the audience regardless of where they were on the pier,” said Mignone. “We were totally impressed with these Legends. They were smaller and lighter than the big name moving spots we used in the past, but they were equally functional. The fact that they were more compact made them a lot easier to set up.”

As befits a Halloween festival in “the city that never sleeps,” Pier of Fear went on until four in the morning.  (The event’s first performance started at 8 pm.)  Even with dawn rapidly approaching, the big crowd at the historic pier was still ready to party on – so too were the CHAUVET Professional fixtures.