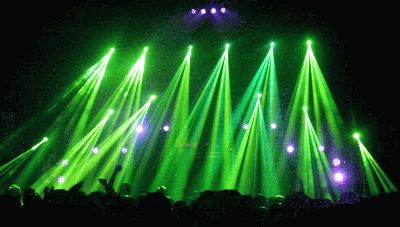 Normally, LD Cody James likes to have some time to prepare for a new show, but as the Rolling Stones so aptly put it years ago, “you can’t always get what you want.”  Recently James was called upon at the eleventh hour to create a lightshow for Brown University’s “After Dark Party,” an annual EDM event that draws about 1,500 fans. Without the luxury of a lot of prep time, the LD from JDI Productions needed a rig that he could set up in a relative heartbeat; he turned to a collection of user-friendly fixtures from CHAUVET Professional for help.

“I’ve worked with Chauvet products many times in the past, so I’m very comfortable with them,” said James. “The fixtures are easy to set up and easy to program, so they act fast – which is exactly what we needed. In the end we had a design that made us all very proud.”

James’ design used 12 Legend 230SR Beam and 16 Legend 412 moving heads. “On the upstage truss, we had six SR beams spaced evenly across a 40-foot stick and a cluster of four Legend 412s in the center of the top truss,” said James. “We also had six towers - two of them 10 feet, two of them 8 feet and two of them 5 feet, all staggered down in size from upstage to down stage with a Legend 230 SR Beam on top of each and two Legend 412s lower on each tower. This rig allowed us to cover the stage with a lot of bright colors and sharp beams.”

James credits the color rendering capabilities of the CHAUVET Professional fixtures with helping him create a powerful visual impression on stage. In addition to 14 solid colors plus white, the Legend 230 SR has a color wheel that delivers seamless split colors. The Legend 412 features 12 quad-color RGBW Cree LEDs controllable in quadrants.

“We were able to generate some awesome energy on stage with all the movement and vivid colors,” said James. “We didn’t really know all of the DJs who would be performing at the party, which ran from 10 pm to 3 am at Lupos Heartbreak Hotel, an old-school concert hall. As a result we had to have the flexibility to improvise a bit on the lightshow, which was a good thing, because the DJs all brought their own brand of energy to the evening.”

The Brown University After Dark Party was headlined by the Los Angeles-based high powered festival bangers, The Bixel Boys, plus Vito and Druzzi, original members of the legendary New York indie dance-punk group The Rapture.

“This was one of the most rewarding projects ever for me, because of the way it came together so fast and so well,” said James. “Peter Therrien and Derek Iorfida of JDI Productions deserve a lot of credit for making this happen - and so do the Legend fixtures we used.”