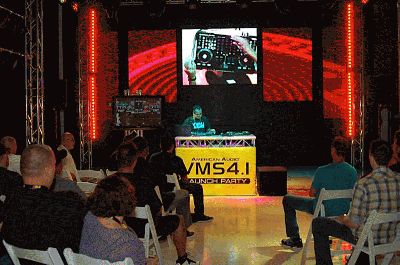 American Audio threw a party for a group of So Cal DJs on September 15 to introduce the widely anticipated VMS4.1 Digital Work Station. The temporary stage at “party central” in the company’s headquarters was set up to look like something out of the Academy Award ceremony.

How fitting was that???  The new VMS4.1 is destined for super stardom as an indispensible mobile entertainment tool.  A lot of companies hype up the second version of existing products as “new and improved.” But the new VMS4.1 goes miles and miles beyond this hype; it builds on the best its predecessor had to offer, smoothes out a few rough edges and adds some pretty incredible new features of its own, to come up with a  tool that will help DJs take their performance to places they’ve never been before.

The VMS4.1 is not only the “next step” in a product series; it’s a giant leap forward into the future. “We’ve taken everything we learned from the VMS4, and taken it to a new level with this product,” said Tom Freret, National Sales Manager of American Audio.  “We’re so pumped up by the VMS4.1; it blows us away every time we see – and hear – it in action.”

Apparently, a lot of the DJs in attendance at the Launch Party agreed.  Words like “wow!” and “amazing,” were heard about as often as “tax cuts” and “new jobs” are at a political rally. Here is a sampling of the reaction:

·         “I’ve been one of the biggest VMS4 fans and supporter since day one, so in my honest opinion they took something great, and made it greater! They listened to their DJs and stepped up to the plate... “Johnny Aftershock Mancilla.

·         “The launch party was very nicely done, well timed, informative without dragging and a very generous goodie- bag and VMS4.1 t-shirts for everyone in attendance... not to mention dinner and beverages! I was honored to be included on the guest list and appreciated the opportunity to learn about all the improvements that were implemented on an already stellar product!”  Ken Heath

The VMS4.1 is using the same Virtual DJ LE software as its predecessor, but this will be updated. When it is, this update will be available at no cost to VMS4.1 owners.

There’s also good news for budget-minded performers in the launch of VMS4.1. The new products is priced at $499.99.  The product will be available the first week in October.