Although a recent college grad, Matthew Sakatos already knows where his lighting design preferences lie. “I really like to focus on EDM events,” says Sakatos, who majored in a digital film and production major 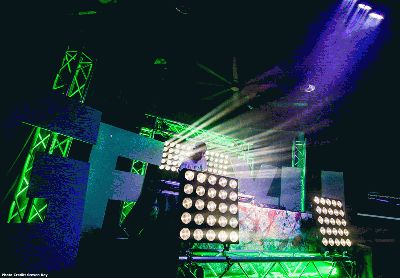 Although a recent college grad, Matthew Sakatos already knows where his lighting design preferences lie. “I really like to focus on EDM events,” says Sakatos, who majored in a digital film and production major at the Art Institute of Charlotte and now works as an audio-visual designer for Eye Dialogue (Charlotte, NC). “The reason I like EDM shows is because they give you the freedom to get as creative as you want to get,” he explains.  “The lights and production are almost the focus of an EDM event.  So it’s a really cool way for your art to be appreciated instantly.”

These days, Sakatos’ art is being appreciated by the growing fan base of Gets F*cking Weird, a free-flowing interactive EDM event that features top North Carolina electronic artists and DJs, along with aerial dancers, magicians, and other wildly costumed performers.  Sakatos met GF*W frontmen Ryan Hart and Kyle Biddy during one of their shows, where he was DJ-ing for the opening act.  “I was really interested in the music, so they decided to team up with me, because not only did I have the (production) ability, but my heart was in the project,” says Sakatos, who is now doing lighting and production on GF*W’s fall tour.

To create a stunning visual environment that captures the spontaneity, frenetic motion and eclectic artistry of a GF*W show, Sakatos chose the Matrix Beam LED from ADJ as his signature light.  A square panel that contains 25 x 3-watt warm white CREE LEDs (arranged in 5 rows of 5), the Matrix Beam LED can be used as both a blinder and a matrix chase effect.  Alpha numeric characters can be created on the panel via DMX, and there are also a lot of exciting high-energy programs built into the unit.

Sakatos typically uses 4 Matrix Beam LED units in a GF*W show. He says that the panel’s versatility, bright beams and hard-hitting effects have been ideal for unleashing visual creativity at an event in which lighting and production take center stage as much as anything else.

Describing his lighting philosophy, Sakatos says that he likes to build up the visual impact of a show and will often “save” the Matrix Beams for later in the evening. “Lighting a show is like telling a story,” he explains. “It’s all about arc-ing your show, so I try to build layers of lighting techniques. For example, at the beginning of the night I may do a lot of uplighting and truss warming just to give it a warm feel.  Then as the night progresses maybe I’ll add some moving-head lights and scanning effects.  Toward the end of the night, I’ll bring in what I call my more heavy-hitting effects – and here my Matrix Beams have been a very effective, really cool effect.”

The Matrix Beam’s versatility has been particularly impressive, says Sakatos.  “It has a lot functionality – you can use it as a low-res video wall, and you can also map out letters and patterns. Also because they’ve got such high-powered LEDs, using them with haze or fog allows for a really cool beam effect.  You can position them as a wall behind your DJ or in front of the DJ booth.  One way I really like to use them is as backlighting that sort of angles up into the air. With each panel having 25 beams going off behind your DJ, it really looks incredible.”

The fact that the Matrix Beam LED is equipped with an easy-to-use internal menu is another feature that makes it ideal for a spontaneous, free-form show like GF*W. “The Matrix Beam has been a great fixture because I don’t really need to pre-program it too heavily. I can pretty much do it manually on the fly, because the internal menu is super easy to navigate – which can often be a huge problem with devices of that caliber,” Sakatos pointed out.  “I think one of the reasons why I’m an effective lighting technician is that I can actually feel when they’re going to build up the music, drop a break or anything like that, and with the Matrix Beam I can make my lights emulate that look.”

Not only creative-wise, but also from a business standpoint the Matrix Beam LED has provided a big edge, says Sakatos.  “For the price, it’s a really incredible light, because it’s so reliable and versatile. It’s a really easy sell when you can say to somebody, ‘Hey it’s got all these amazing features, and it only costs this much.’ It’s one of my most-used lights now.”

Sakatos says that when a new fixture like the Matrix Beam LED comes out, “it’s really cool to use it, play with it. I really enjoy what I do,” he adds, “and hope that others see me as someone who is a creative designer whose goal is with every show to grow in size, creativity, and new technology. To continue to do things that have never been done, or take old concepts to a new level.”