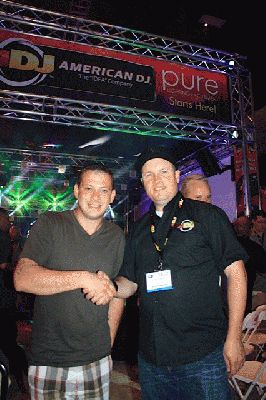 Usually when people head to Atlantic City, they hope they’ll have some luck there.  For Adam Moyer of Silver Sound DJ’s, his luck came before he even left home.  As the winner of American DJ’s Expo Express contest, Moyer received a trip for himself and a friend to the recent DJ Expo in Atlantic City.  The prize included accommodations at the Trump Taj Mahal Hotel and $500 in “Expo Bucks” that Moyer used to get the Mega GO Series at the event.