DJZone, the Web’s largest information network for disc jockeys, announced the recipients of their 2013 Crystal Disc Awards at the 112th NAMM Show in Anaheim, CA. 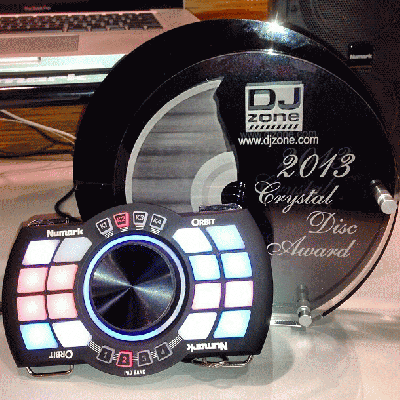 DJZone, the Web’s largest information network for disc jockeys, announced the recipients of their 2013 Crystal Disc Awards at the 112th NAMM Show in Anaheim, CA. The awards are given annually to sound and lighting manufacturers whose products exhibit superior technical innovation for the mobile and club disc jockey industries.

DJZone’s first 2013 Crystal Disc was awarded to Numark for their Orbit portable midi DJ controller. The Orbit is a handheld wireless device that incorporates the features of a handheld game console into a DJ controller. The DJ can map the map the Orbit's buttons and features to any midi mapable software including Traktor, Serato, Virtual DJ and more.

“To have the freedom to not only mix, but create music down with the audience has a coolness factor to it. That is why I chose the Orbit.” said Sid Vanderpool, president of the DJZone Network. “It takes all the control features of you software and places them at your fingertips on your wrist of hanging from a necklace.”

Numark’s Orbit is the next step in the evolution of the performing DJ. Made to be held in the hands, strapped to your body using its built-in clip, or placed on the table, Orbit packs an unheard-of amount of control into an ergonomic game-controller-on-steroids design, which has every inch, inside and out, tailor-made for live performance. Orbit can be used wired via the included USB cable, which also charges it, or wireless using 2.4 GHz ultra-low-latency connectivity. Orbit features 4 selectable banks of 16 backlit pads, 8 on each side, for adding and blending effects, launching hot cues and samples, and more. Located in the center of Orbit are 4 bank selection buttons, 4 virtual knobs, and a large aluminum-faced touch-sensitive control wheel, which controls the selected virtual knob for instantly tweaking effects and filters.

Orbit embraces that reality to its core, empowering DJs with performance capabilities

“If you want to be a serious DJ these days, you need the guts and the gear to get out on the stage and perform,” said Chris Roman, Numark Product Manager. “Orbit embraces that reality to its core, empowering DJs with performance capabilities that will need to be seen and experienced to be believed. It’s intuitive, operating like an extension of the DJ—not to mention it’s the most fun you’ll ever have on stage.”
Orbit’s live-performance design extends even to the inside of the device, where it has an embedded 2-axis accelerometer, which can be assigned to 2 different parameters per bank and activated instantly via 2 shoulder buttons. All of Orbit’s controls are fully mappable, so DJs will be able to customize their settings for effects control, transport control, volume control, or any other MIDI parameter.