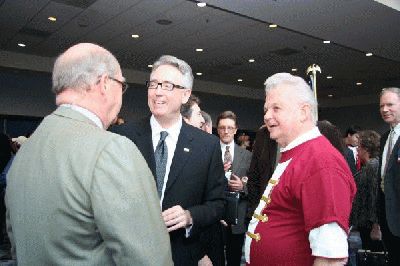 The National Association of Music Merchants (NAMM) today announced the final registration and exhibitor numbers for the 2012 NAMM Show, the largest and longest-running musical instruments and products trade show in the United States.

"Once again the NAMM Show served as the crossroads for musical instrument and live sound products manufacturers, retailers and their guests from all over the world,” said NAMM President and CEO Joe Lamond. "We are extremely grateful to all of the NAMM Members, music educators, artists, partners and media who made this 110th NAMM Show a resounding success for the industry and a great start to 2012."

The annual trade show is the place where music products retailers meet face-to-face with manufacturers to make their biggest purchases and gain product knowledge for their stores in the year ahead. Throughout the four days of business deals, educational sessions and live music performances, the mood of the show was energetic and positive.

"We'd like to deeply thank NAMM for their incredible support during our first show as exhibitors." said John R. Gibson, President and CEO, Wi Digital Systems. "Thanks to NAMM, we hit every stretch target, including major media exposure and signing up significant new accounts."

"We were very pleased to see so much enthusiasm from our dealers at NAMM," said Courtland Gray, Chief Operating Officer, Peavey Electronics Corporation. "Our new self-tuning Peavey AT-200 guitar, PVX powered speakers, Max Series bass amplifiers and more all made a very positive impression. We're off to a great start for 2012."

“We are extremely pleased with our experience during the 2012 NAMM Show,” said Jason Padgitt, senior vice president, marketing and communications for Fender Musical Instruments Corporation. “The enthusiasm we have received on all of our new products from our family of brands has been terrific.”

“The show was noticeably better in attendance this year," said Rick Young, Yamaha Corporation of America. "We were consistently packed Thursday through Saturday and Sunday was better than in many of the last years. We had a good array of new products to show our dealers and everyone was upbeat and hopeful. Now that we have the manufacturers and retailers excited, we have one more important group to get excited and that is consumers. Obtaining the mindshare and walletshare of consumers will be the key to success in 2012.”

“Martin Guitar’s NAMM booth was packed from the opening of the show to the close," said Dick Boak, C.F. Martin & Co. Inc. "It was the busiest show that we’ve ever seen. We depend upon this important gathering to hold critical meetings with our dealers and distributors, and to write scheduled orders for the coming year. The business we conduct at the show is vital to our growth!”

"We had a wonderful show, said Lizabeth Gray, Santa Cruz Guitar Co. "Lots of sales for the next two years and we're very pleased. I would say that this has been one of most successful NAMM Shows ever!"

“We had a great show,” said John Sorenson, director of sales planning, Avedis Zildjian Company. “Our international representation was very strong. We had some great programs that we released this year and the uptick was very, very good. So we’re looking forward to a great 2012 for sure.”

Themed "Make It Count,” this year’s NAMM Show focused on innovation in the form of apps and technology products designed to make playing music more accessible and easier than ever for consumers.

"I think we did great,” said Trisha Lurie, Jammit. "Everyone liked what we are doing. Great foot traffic in the App and Gaming Pavilion. Our app was very well received at this year’s NAMM Show."

"We had a really great show, said Bradley Walker of Agile Partners, another App Pavilion exhibitor. "Our app generated a ton of interest from guys in Poland, Spain and the UK this year. I think we really got more hands-on this year. The idea of running an amplifier on an iPhone or iPad is better understood and people now want to know how our app compares with the rest of the market."

“We had a press event Wednesday night and we had a dealer party as well and those were very well received, we had a good turnout for that, so we’re having a very good show," said Gloria Harris, Casio. "A lot of booth traffic. We had scheduled a lot of appointments and people came out and they saw the product and they loved it. We’re excited for the new year.”

"We had a great, great show," said Chris DeMaria, Fishman Electronics. We had a couple new products to unveil and we had a lot of excitement, a lot of traffic, a lot of people came by to see what we’re up to and it was pretty exciting. It was a good year for us in 2011 and great to be back in 2012 and meet with our dealers and meet with some of our business partners and we had a great show. We’re seeing some new dealers and it’s a great opportunity for the existing dealers that we normally see at NAMM because we don’t always get out there to meet with them face-to-face and this show is great because it really sets the tone and allows a lot of people to get in the mindset for the New Year.”

“We had an amazingly great show—it was very successful,” said Marco Soccoli, director of artist relations, D’Addario. “We’d like to thank NAMM. Until next year!”