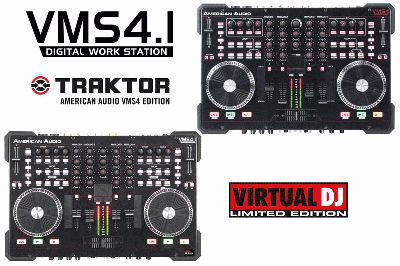 American Audio’s highly versatile VMS4 MIDI controller and analog mixer has been a smashing success — lauded as “the ultimate DJ work station” — since its auspicious debut in the summer of 2010. Now comes the widely anticipated VMS4.1, a next-generation version that offers better audio quality and faster processing while retaining all the great DJ performance-enhancing features of the original. Bundle that with your choice of TRAKTOR American Audio VMS4 Edition or Virtual DJ LE software, and the VSM4.1 becomes a complete professional DJ control system and an incredible value.

At the heart of the new VMS4.1 is American Audio’s exclusive studio-quality DSP D-Core Audio Engine, which allows the unit to run more smoothly and process audio faster than ever before. This unique feature raises the performance capabilities of the VMS4.1 to exciting new levels of showmanship and professionalism.  Another new feature is a built-in 4 In/4 Out Sound Card.

The VMS4.1 also gives users more creative options and added value by offering two software-bundled editions: one with Virtual DJ LE and another with TRAKTOR American Audio VMS4 Edition. Whichever version you choose, the versatile VMS4.1 accommodates both platforms 100 percent, and it’s also compatible with numerous other popular software brands that DJs prefer. The new Traktor-ready edition not only comes bundled with highly desirable software — it has its own unique faceplate and special button placement to provide fast, easy access to all of Traktor’s powerful effects and features. The Virtual DJ LE bundle is a great way for traditional DJs and software-newcomers to get digitally up-and-running right out of the box.

Featuring completely new internal hardware, the VMS4.1 also offers improved audio quality with significantly upgraded mic sound and four times more output capacity. It has a stronger face mounting than its predecessor and brighter LEDs on all of the control knobs and buttons. The VMS4.1’s advanced cell-phone interface shielding makes the unit even more reliable, guaranteeing interference-free operation in any environment.

“The original VMS4 truly broke new ground in digital work stations,” said Tom Freret, National Sales Manager for American Audio. “We learned a lot of lessons by blazing a new path, and we applied those lessons to the development of the VMS4.1. DJs everywhere will be blown away by all of the improved features and performance-boosting versatility of this amazing next-generation product. Plus you have the new Traktor-ready option, and I think we’ve really hit a homerun with the VMS4.1.”

Of course, all of the innovative features that the original VMS4 brought to the mix have been incorporated into the new, upgraded unit.  The VMS4.1 offers 4 selectable dual-purpose MIDILOG™ (MIDI + analog) channels that are compatible with any MIDI software as well as traditional audio inputs. That means it can be used with a computer (Mac or PC) for digital DJ-ing or as a regular mixer with turntables and CD players.

The user-friendly interface of the VMS4.1 features 2 jog wheels, a built-in mousepad that allows DJs to make all of their selections right from the top of the unit (instead of their laptop), and 2 microphone channels with gain/treble/mid/bass EQs. Each of the mixer’s four channels is fortified with gain, treble, mid and bass controls. The mixer itself offers the option of being used with an Innofader replacement crossfader (sold separately), which is typically found only on high-end professional DJ gear.

“When it comes to DJ audio gear, we no longer live in a one-size-fits-all world,” Freret said. “Mobile entertainers work with a variety of different media, performing with a computer or conventional audio gear, often switching between the two. The VMS4.1 gives them the flexibility they need to perform however they choose. It combines all the features of a 4-channel professional club mixer, 2 touch-sensitive table-top decks, a MIDI controller and the top DJ software into one compact unit with a durable steel chassis.  Plus it offers the versatility of 2 analog inputs to connect 2 CD decks or 2 turntables, so DJs can play from these sources as well as a laptop.”

Despite its new, improved features, the price of the VMS4.1 Digital Work Station (bundled with Virtual DJ LE software) remains the same as its predecessor, just $699.95 MSRP.  The MSRP of the new VMS4.1 TRAKTOR model (bundled with TRAKTOR American Audio VMS4 Edition) is $899.95.