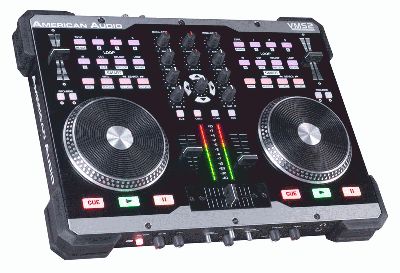 When it hit the market last year, American Audio’s VMS4 4-channel MIDI controller was hailed by many as “the ultimate DJ tool” for its total versatility in adapting to way today’s DJs play – whether you use a computer for digital DJ-ing, a traditional analog mixer, or some of both.  Now American Audio is building on the success of this marvelous MIDI machine with the addition of a new model to the VMS Series – the VMS2 Digital Work Station, a compact, highly affordable 2-channel version that comes bundled with an updated edition of Virtual DJ LE software.

Like the original, the new VMS2 features MIDILOG™ channels (in this case 2 channels) that are compatible with both any type MIDI software or analog inputs such as CD players or turntables, giving DJs total flexibility to move freely between the digital and analog worlds.  Also like its larger cousin, the VMS2 can be used with either a PC or Mac, making it one of the most adaptable pieces of gear on the planet!

The VMS2 also offers more features and a higher level of performance than other units in its price range. For starters, it contains American Audio’s exclusive “D-Core” Audio Engine, which provides professional studio quality sound and very high output.  It also features balanced XLR outputs, a combo XLR/ ¼” mic input, and a built-in 4 In/ 4 Out Sound Card.  Additionally, like the original model, the VMS2 can be used with an Innofader replacement crossfader (sold separately), an option that puts it in a class with the very top pro gear on the market.  All of this for a MAP of just $349.99!

And of course, the VMS2 comes bundled with popular, easy-to-use Virtual DJ LE software, adding to its value and allowing you to start digital DJ-ing right out of the box.  The new, updated version of Virtual DJ LE contained in this package offers added features such as Smart Scratch and Clone, which will further enhance your performance.  Those who prefer to use other DJ software programs will be happy to know that the VMS2 can accommodate those too -- after all, one of the things the “V” in its name stands for is “versatility.”

“We are very proud to introduce theVMS2, which offers more features, more performance and more value than any product in its class,” said Tom Freret, National Sales Manager for American Audio.  “The response to our original VMS4 was so overwhelming when it was introduced last year that we decided to create a 2-channel version for DJs who didn’t need as large a unit, but wanted all of the amazing features and versatility that made it such a revolutionary product.  The VMS2 is designed for DJs who want a high-performance, all-in-one MIDI controller that will allow them to play MP3 tracks from their computer, plus have the option to add analog components such as CD players and turntables.  It will definitely help them step up their performance to the next level.”

In addition to being designed for the way they play, the VMS2 was built for the way today’s DJs travel.  Its heavy-duty industrial grade steel construction can withstand the knocks, bumps and other punishment that gear takes on the road. As an added convenience, rack rails are included for mounting the unit to a 19-inch rack mount case.