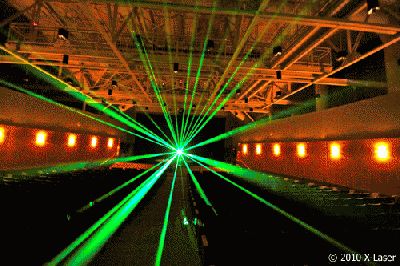 Flexible, unconventional design has yielded X-Laser’s newest product in the Nocturne series: XBeam. Built on an all new rugged metal chassis, X-Beam packs the most powerful punch of any laser in its’ power class while maintaining the go-anywhere portability of much less powerful systems. With the heaviest model weighing in under 20 lbs. and the longest housing dimension under 16” X-Beam projects a classic laser rock show look from anywhere with ease - all at a cost of less than half of similarly powered US compliant models.

X-Beam was conceived, designed and built from the ground up in the United States for nightclubs and mobile production companies who need high powered Class IV aerial laser effects in a small, affordable package. Although X-Beam comes standard with almost one hundred pre-loaded patterns which can be accessed and manipulated by standard DMX-512 protocol, it also comes standard with an ILDA interface allowing the user to project custom
content like simple text, images and logos hundreds of feet through the air. The ability to use popular laser software to create and project custom content on demand gives the X-Beam a major value advantage over older multi-turret design laser beamers.

Every aspect of X-Beam was designed to respond with maximum power whenever you call for a beam - up to 30,000 times per second - striking precision tuned scanners which deliver fluid waves, cones, sheets and much more. Sweeping through the visual field as slowly as possible and scanning just fast enough to provide fluidity of projections, X-Beam allows its’ beams to linger in the viewer’s vision up to three times longer than hi-speed graphics heavy systems which results in greatly improved perceived brightness.

There are many subtle factors which effect perceived brightness but the most basic of course is raw power which is why X-Laser guarantees that every X-Beam will actually project an unheard of 100% of its’ power rating. There will no fuzzy “typical” power levels, optical losses you are never told about, large portions of the beam power being just invisible infrared, ‘you can only measure it on a Tuesday,’ etc. With X-Beam, three watts is three visible watts of pure light out the front. Period.

Made by hand in the USA to the nation’s strictest FDA approved quality control standards, XBeam delivers much more than just a rock solid laser performance, it also delivers exceptional value and security. Each X-Beam system is not only guaranteed to be fully FDA certified and legal to use in the United States, it will even ship with a gift certificate good for one free cleaning, tuning, re-alignment and FDA re-certification - a $250 value - absolutely free. X-Beam
can even be upgraded at the time of order, service or anytime thereafter to a PRO version featuring faster scanners, analog dimming and even the widest scan angle of any laser product on the market: a full 90 degrees of beam coverage.

Initial X-Beam models will feature green laser sources with power levels ranging from 500mW to 3,000mW. X-Beam will be debuted for the first time to industry at LDI Las Vegas 2010 projecting through the custom indoor waterfalls made by Salvin Designs.