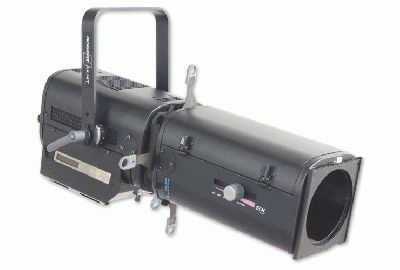 TIBO LED is a high intensity 75W LED profile with a choice of two zoom ranges in one single unit (30°/45 and 15°/ 35°). Plastic, glass or metal M-size gobos can be projected and benefit from the easy alignment afforded by the 360° rotating lens tube. Three colour temperatures are available: Warm White (3000K), Neutral White (4000K) and Cool White (6500K). TIBO LED is supplied with a separate, flicker-free power supply which makes it extremely versatile as it can be used in film, television and studio environments as well as in conventional theatre. The cool running LEDs make it suitable for use in listed venues, exhibitions, museums or when lighting valuable or light-sensitive objects.

TIBO is also available as a tungsten unit with a choice of 300W, 500W, 600W and 650W lamps. Like its LED counterpart, TIBO Tungsten offers two zoom ranges in the single unit, a 360° rotating lens tube and is available in a choice of bodywork colours.

TIBO Tungsten also benefits from a double safety system which uses micro-switches to automatically cut power when the unit is opened.

Both LED and tungsten versions offer a shutter lock which fixes the 4 shutters firmly into place to prevent movement from knocking or grid vibration.

A silent, flicker-free, in-built PSU makes ZEP ideal for studio applications when working alongside sensitive camera equipment. ZEP has smooth, high-quality dimming, even at low levels, which renders it perfect for all theatre applications, including the high demands of opera. ZEP is available in three zoom options: 28°/54°, 16°/35° and 11°/26°.

TIBO LED will illuminate Robert Juliat’s PLASA stand and illustrate the quality of its performance and its low energy requirements. An array of RJ profiles – including TIBO and ZEP profiles - will project gobos and show off their projection quality and the versatility of the whole RJ profile range.

Also on the stand will be a selection of Robert Juliat’s famous followspots including the 4000W HTI LANCELOT which recently appeared on the Queen’s Diamond Jubilee Concert and the Eurovision Song Contest, the unique 1800W MSR VICTOR long throw spot and its short throw counterpart, FLO.

FLO will be presented in its motorised form with the addition of a colour scroller accessory which can be powered directly from the followspot’s PSU. This feature ensures both colour and dimming can be controlled directly from the lighting desk for perfectly synchronized operation.